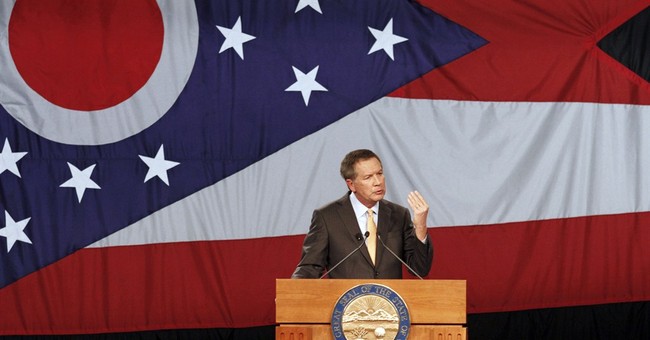 It's a busy Monday in presidential politics. Gov. Bobby Jindal took another formal step toward announcing his long-expected candidacy, Sen. Lindsey Graham announced his intention to seek the Republican nomination, and Jon Karl of ABC News is reporting that Ohio Gov. John Kasich is "virtually certain" to throw his hat into the ring:

John Kasich is “virtually certain” to jump into the race for the 2016 Republican presidential nomination, sources close to the Ohio governor tell ABC News. Kasich has said his wife and daughters have given him a green light to run and in recent days Kasich has told his political advisors to begin preparing for a likely campaign. Kasich travels to New Hampshire in early June and recently did a fundraising trip to California. If he makes the final decision to run, he will make the announcement in late June or July.


As the twice-elected, popular governor of a crucial swing state, Kasich is formidable.  His re-election victory last year was extraordinary: Kasich won nearly two-thirds of Ohio's statewide vote; he carried women by 23 points, won young voters by double-digits, and cleaned up among independents, winning that group by a staggering 43 points.  The governor even won the support of one-third of black men, and one-in-five black female voters -- no small feat for a Republican.  Granted, Kasich was facing a genuine trainwreck of an opponent, but he led comfortably in the race from wire-to-wire.  There's a reason why Democrats failed to field a strong challenger against him.  Ideologically, Kasich presents a mixed bag for conservatives.  There's plenty to like -- via National Journal's March profile:

By and large, Kasich remains the deeply conservative politician he has always been: the government-slashing deficit obsessive who drove Democrats bonkers as chairman of the House Budget Committee in the 1990s. "He was Paul Ryan before Paul Ryan," praises antitax crusader Grover Norquist. As Ohio's chief executive, Kasich has eliminated the estate tax, cut income-tax rates, tightened food-stamp requirements, cut school funding, and championed business deregulation. He signed into law new restrictions on both abortion rights and voting rights, and, during his first year in office, launched a (failed) crusade to geld public-sector unions—similar to the one that Scott Walker led in Wisconsin. Three months ago, Kasich set his sights beyond Ohio, embarking on a national tour lobbying state lawmakers to call a constitutional convention aimed at ratifying a balanced-budget amendment.

Then comes the very next paragraph:

But the governor is also prone to jabbing his finger in the eye of his base with moves like raising infrastructure spending, increasing tax breaks for low-income residents, championing a fracking tax on oil and gas producers, pushing to hike cigarette taxes, making education funding more redistributive, increasing spending on mental-health care, mandating insurance coverage for autism, or commuting death sentences. And of course there's the granddaddy of betrayals: Medicaid expansion, which Kasich rammed through over opposition from Ohio's Republican-controlled Legislature.


While the governor has a long history of combating deficits and pursuing generally conservative policies, he's not above relying on new consumption taxes (some of which are particularly regressive) to help balance his budget proposals -- total spending in which has ballooned by 40 percent over his term in office, according to Ohio Watchdog.  What has irked some of Kasich's conservative critics is his propensity to couch his government expansionism in explicitly religious terms, which some say is a deliberate effort to suggest that he's carrying out God's will by increasing government spending.  Kasich routinely deploys faith-based arguments to defend his embrace of Obamacare's Medicaid expansion (he declined to set up a state exchange, and says he opposes the broader law), casting his decision as a fulfillment of the Biblical charge to help the poor.  This framing side-steps unpleasant realities about the Medicaid expansion, which extends an over-burdened and empirically failing program to many more people, exacerbating pre-existing 'access shock' problems.  Medicaid expansion is increasing so-called 'uncompensated care,' straining state budgets across the country, and sucking more people into government dependency.  And by including less impoverished Americans in a faltering program designed to care for the indigent, Medicaid expanders are spreading limited resources even thinner, hurting the core group the program was originally erected to help.  Is any of that truly "compassionate"?  These are questions with which Kasich will be confronted in a competitive GOP primary.

I'll leave you with a logistical question for the Republican Party: In light of the ever-growing field of serious presidential hopefuls, how will the early primary debates work, exactly?  Maybe I'm wrong, but I suspect a 14-podium spectacle would look like an excessive circus to many viewers, and would accomplish little.  But if the RNC winnows down the eligible field by imposing various restrictions, might they run the risk of boxing out the only woman in the race, or the lone African-American, or one or more sitting governors/Senators, or 2012's runner-up?  Read Allahpundit's post on these thorny questions and scroll down for a few potential solutions.

UPDATE: Is the party looking to cap the debate field somewhere "between nine and twelve"? If so, who gets left on the outside looking in, and how will that be determined?
Why a WSJ Columnist Thinks Biden Might Have Hurt Himself with Progressives After First Debate Chaos
Matt Vespa
Graham Shuts Down 'Ridiculous, Most Absurd Idea' Suggested for Judge Barrett
Katie Pavlich
Senate Passes Temporary Spending Bill Just Hours Before Deadline
Bronson Stocking
Frank Luntz's Surprising Discovery with Post-debate Focus Group of Undecided Voters