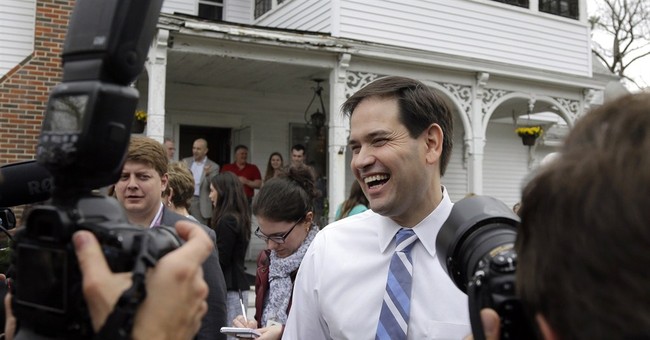 Marco Rubio's strong campaign launch week has propelled him into the top tier of contention for the GOP nomination, according to a new CNN poll. Despite his strong favorability numbers among Republican voters, the Florida Senator had been stuck in the mid-single digits on 2016 primary ballot questions. That's changed, at least for now, as Rubio has bounced into double-digit territory and is tied for third place:

Overall, 17% of Republicans and Republican-leaning independents back Bush for the GOP nomination, while 12% support Wisconsin Gov. Scott Walker. Paul and Rubio stand at 11% each, with former Arkansas Gov. Mike Huckabee at 9% and Cruz at 7%… On one metric, however, Bush has an emerging challenger. While 18% see Bush as the candidate who best represents the future of the Republican Party, the same share say fellow Floridian Rubio is the best representation of the GOP’s future. Paul, at 10%, is the only other candidate in double digits on this question…


Rubio also fares best in CNN's national head-to-head numbers against Hillary Clinton, "only" trailing her by...14 points.  He's the only Republican who breaks into the 40's against Hillary, with most others mired in the high 30's.  Ted Cruz fares worst, pulling in 36 percent against Hillary's cool 60 percent.  Three caveats: CNN's general election polling has been especially unfavorable to Republicans so far, Hillary Clinton has universal name recognition (unlike virtually every Republican in the race), and swing-state polling has been much more competitive -- in Iowa, Colorado, and now Florida, too:

Both leading Republican candidates from the Sunshine State now lead Democrat Hillary Clinton in Florida. Statewide, former governor Jeb Bush leads Clinton 47%-43% and Senator Marco Rubio, who trailed Clinton in January, has a slightly larger 49%-43% advantage. Predictably, support divides sharply along partisan lines, with Bush and Rubio holding strong leads among Republican voters and Clinton well ahead among Democrats. Bush and Rubio are ahead because both are running stronger with independents. The gender gap, which Clinton hopes to exploit in her quest to become the first female president, is present. However, that gap exposes that her deficit among men is a stronger force than her advantage among women.

More like GOP candidate needs to win in Florida than the Dem candidate... pic.twitter.com/r3sfwevifc


You can play around with various states (flip New Mexico/Colorado/Nevada to Blue, and Florida to red, for example, and Republicans win), but without the Sunshine State's 29 electoral votes, the GOP's path to victory is basically nonexistent.  And then there's the small matter of winning back Ohio and Virginia, too.  In any case, it'd be wise not to get too excited or alarmed by any 2016 polling at this stage.  Current surveys tend to reflect several trends that aren't likely to budge anytime soon: Hillary Clinton, despite staggering flaws, will be formidable.  The Republican nominating contest features a deep field and will be very competitive.  And the GOP electorate is far from settled in its preferences.  The good news for Rubio is that his announcement made a splash and moved the needle.  He helped himself, broke through with primary voters, and reportedly made a good impression on the big money class to boot.  But with a parade of announcements scheduled over the coming weeks, it won't necessarily be surprising to see his surge subside a bit, as future news cycles showcase new entrants.  Meanwhile, while the Obama/Hillary foreign policy continues to crater, young Muslim Americans try to join ISIS in disturbing numbers, the national debt churns ever higher, Obamacare harms millions of consumers, and the economy limps along in its historically tepid recovery, the media is busy tallying which Republican candidates would attend a loved one's same-sex wedding.  Rubio got the question first, and handled it well.  He's a "yes" (adding that he believes sexual orientation is innate, not chosen).  Rick Santorum is a "no," Ted Cruz dismissed the hypothetical and instead addressed the Constitutional and policy questions, and now Scott Walker weighs in with a, "yes, and I already have, actually."  At some point, Republicans are going to need unify and address "gotcha" questions with a hybrid Rubio/Cruz approach.  Address the underlying issue succinctly and smartly, then emphasize how frivolous some lines of questioning have become.  And while the whole GOP field is getting quizzed on hypotheticals involving the potential nuptials of roughly three percent of the population, the effective Democratic nominee is taking zero questions, period.  I'll leave you with CBS News asking if President Rubio would sign the 'Gang of Eight' immigration bill he co-sponsored in the Senate: