Rubio: 'Of Course' I'd Attend a Loved One's Gay Wedding 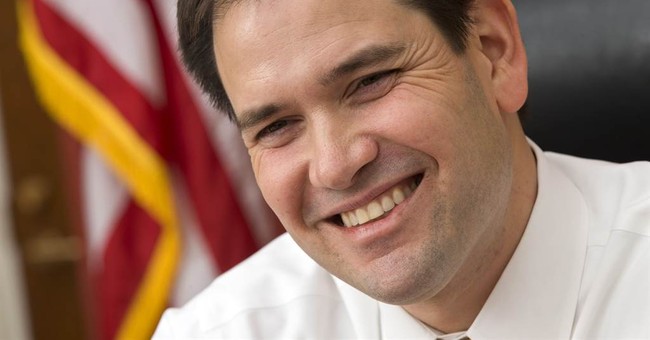 Mediaite is hyping this exchange as anchor Jorge Ramos "cornering" Rubio with a question about whether he'd attend a friend or family member's same-sex wedding or commitment ceremony.  In fact, Rubio gamely addresses the 'gotcha'-style inquiry with a serious, compassionate answer, then reiterates his position when Ramos presses further, appearing to have missed his entire point:


“If it’s somebody in my life that I love and care for, of course I would. I’m not going to hurt them simply because I disagree with a choice they’ve made, or because I disagree with a decision they’ve made, or whatever it may be. Ultimately, if someone that you care for and is part of your family has decided to move in one direction or another or feels that way because of who they love, you respect that because you love them. But again, as I said, I'm a member of the Catholic faith, that teaches, for example, that divorce is wrong. But if someone gets divorced, I'm not going to stop loving them, or having them [be] a part of our lives..."


Rubio says he absolutely would attend a loved one's gay wedding, out of love for that person.  Disagreements over political questions, personal beliefs and religious doctrine don't prevent him from respecting and supporting people in his life, he explains.  The Senator's point about Catholic teachings on divorce was particularly apt; just because his church frowns upon divorce doesn't mean he'd shun a relative or friend's second wedding.  The Mediaite blogger who wrote up the clip offers this color commentary at the end of the piece:

Does this mean he would “respect” the supposed “decision” of a loved one to marry their same-sex partner, but not the millions of other LGBT Americans he doesn’t know? One has to wonder: If there is a loved one in Rubio’s life who is gay and might want to get married someday, what must they think of his anti-gay marriage rhetoric?


The question Rubio was asked pertained to whether or not he'd boycott the same-sex commitment or marriage ceremony of someone close to him. Of course he wouldn't, he replied. At the same time, he continues to hold a traditional view of marriage as a matter of public policy. That's not a contradiction. The vast majority of Americans who oppose same-sex marriage don't do so out of fear or bigotry toward gay people; Rubio's "anti-gay marriage rhetoric" clearly reflects that. The presidential candidate demonstrates how one can be a kind, loving, inclusive human being who also declines to abandon more traditional values on a controversial issue.  Some gay rights supporters seem intent on denying their fellow citizens this middle ground as an acceptable moral space to occupy.  (Mary Katharine and I expand on this point in End of Discussion, out June 9).  As for the hypothetical question about how a "loved one in Rubio's life" might feel, I'd suspect that person might think, "Marco and I have a disagreement on this question, but he loves and supports me as a person, and if I choose to codify the relationship with the person I love, he'll be there for me."  Ramos' question, by the way, was typical mainstream media fare, ever eager to drag conservatives into hot button tempests.  It's a fact of life for Republican office-seekers.  Rubio handled the question, and its redundant follow-up, graciously -- underscoring a striking dichotomy in the process:


If the press wants to apply their standards evenly (please stifle your laughter), Hillary Clinton will be forced to weigh in on a number of thorny and boutique issues, fraught with cultural cross-currents. For instance, should this woman lose her business for declining to participate in a gay wedding? Hillary's base believes that she should; most Americans do not. Also, please recall that Hillary Clinton only came around to believing that gay marriage is a Constitutionally-protected right, er, this week. Has she "evolved" from a gay marriage opponent to a coercive proponent in a few short years? Also, Secretary Clinton, how many genders are there? Just curious.