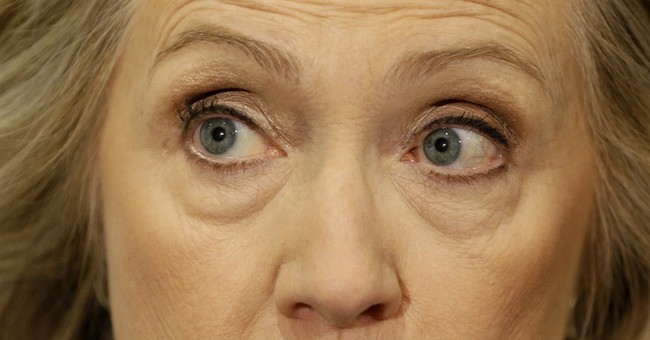 Let's examine a few significant updates on the Hillary email scandal, starting with perhaps the most important -- but least covered -- aspect of the imbroglio: Unconscionable national security risks. In order to shield her communications from oversight and public information requests, Hillary Clinton chose to set up a private email server in her home, rather than use a secure official account. Regardless of the ethical propriety and legality of that decision (stay tuned on those points), intelligence experts believe her actions led to extraordinary breaches at the hands of foreign governments and outside entities.  Please read every word of this excerpt from Bloomberg's Eli Lake and Josh Rogin:

Hillary Clinton didn't take a basic precaution with her personal e-mail system to prevent hackers from impersonating or "spoofing" her identity in messages to close associates, according to former U.S. officials familiar with her e-mail system and other cyber-security experts. This vulnerability put anyone who was in communication with her clintonemail.com account while she was secretary of state at risk of being hacked. Clinton said at the United Nations last week that there were no security breaches of her personal e-mail server, which she used to send and receive more than 60,000 professional and personal e-mails. But former cyber-security officials and experts told us that there were gaps in the system...According to publicly available information, whoever administrated the system didn't enable what’s called a Sender Policy Framework, or SPF, a simple setting that would prevent hackers sending e-mails that appear to be from clintonemail.com.

SPF is a basic and highly recommended security precaution for people who set up their own servers...Experts told us that oversight was just one flaw of a security system that would have been relatively easy for foreign intelligence services and others to exploit. "I have no doubt in my mind that this thing was penetrated by multiple foreign powers, to assume otherwise is to put blinders on,” said Bob Gourley, the chief technology officer at the Defense Intelligence Agency from 2005 to 2008 and the founder of Cognitio, a cybersecurity consultancy...Spoofing a senior official’s e-mail identity is also an easy way to conduct "spear phishing" attacks, where an attacker sends a personally crafted e-mail that appears to come from a trusted source. Once the target opens it, his own system can be compromised. Clinton said she e-mailed with dozens of State Department and White House officials using her server, including President Barack Obama.


Not only did Hillary's overwhelming impulse for secrecy and contempt for accountability put her own emails at risk -- bad enough, given her role as the country's top diplomat -- it also endangered the integrity of her contacts' communications.  This is unforgivable.  Myopia, paranoia, arrogance and reckless incompetence, all rolled into one set of astounding revelations.  By the way, just a few days ago, the State Department shut down large parts of its email system due to malware placed by Russian hackers who somehow burrowed into the network.  Do we know for a fact that Hillary's insanely insecure email scheme compromised State's broader system?  No.  Is it a distinct possibility, given everything we know?  Absolutely.  How many State Department, White House, and foreign officials' sensitive emails were put at risk, or penetrated?  That may forever remain an open question, especially if Hillary maintains her obstinate refusal to turn over the server.  Setting aside her disregard for national security and undermining of American foreign policy, is what Hillary did illegal?  Law professor Ronald Rotunda reviews the facts of the case and concludes there's a good chance she violated the law:

The law says that no one has to use email, but it is a crime (18 U.S.C. section 1519) to destroy even one message to prevent it from being subpoenaed. Prosecutors charging someone with obstruction don’t even have to establish that any investigation was pending or under way when the deletion took place. As T. Markus Funk explained in a journal article for the National Association of Criminal Defense Lawyers, the prosecutor “need only prove that the defendant shredded the documents, at least in part, to make life more difficult for future investigators, if and when they eventually appear.” Legal commentators call this “anticipatory obstruction of justice,” and the law punishes it with up to 20 years imprisonment. The burden of proof is light. The Justice Department manual advises that section 1519 makes prosecution much easier because it covers “any matters” or “’in relation to or contemplation of’ any matters.” It adds, “No corrupt persuasion is required.”


Again, without access to the secret server, definitive proof will be hard to come by. This may explain why Hillary is guarding it so zealously. Would the media allow a Republican to permanently withhold a private email server on which he or she conducted official business, in violation of numerous regulations and rules? Would they take "it's all fine, trust me" as an answer, even after stories shifted as new facts came to light? Will Hillary get away with this? Finally, if you haven't already, read this tough take-down of Team Hillary's "laughable" excuses and explanations by Dan Metcalfe. He spent decades as the "federal government’s chief information-disclosure guru," and here's his verdict:

Having spent a quarter-century at the forefront of the government’s administration of the FOIA, including its transition to electronic records and its involvement in so many Clinton administration “scandals du jour,” I know full well that both what Secretary Clinton arranged to do and what she now has said about that are, to put it most charitably, not what either the law or anything close to candor requires. At a minimum, it was a blatant circumvention of the FOIA by someone who unquestionably knows better and an attempted verbal “cover” of the situation (if not “cover-up”) that is truly reminiscent of years past.


The whole piece is damning, but here's how it ends: "I say that even as someone who, if she decides to run for president and is the Democratic nominee, will nevertheless vote for her next year." Sure, she's a duplicitous secretive scofflaw, but she's got my vote. As of this moment, it seems Mr. Metcalfe isn't alone. Yikes:

This is way early, all adults, etc--but GOP should worry about these numbers Poll: Hillary Clinton still tops in 2016 http://t.co/WW7JrqlLsV