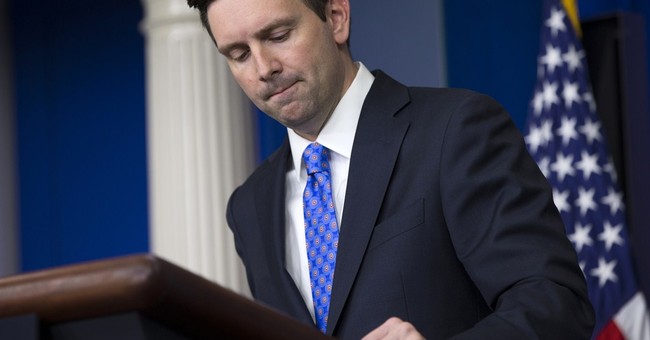 It's already been a busy week for Obama administration spokespeople. Within hours of the new Congress being sworn in, the White House issued presidential veto threats against two popular pieces of legislation. This early signal of entrenched, out-of-the-mainstream obstructionism fomented consternation and defiance among the dwindling ranks of moderate Democrats on the Hill, and prompted this hilariously backwards analysis from the White House podium:

Does veto threat raise Qs about Obama's working w Cong? Earnest: "Maybe it raises Qs about the willingness of this Congress” to work w him


"I know you are, but what what am I?"  The environmentally-sound, job-creating, alliance-strengthening Keystone XL pipeline is supported by a strong majority of Americans, and large bipartisan Congressional majorities.  It seems the president's first major interaction with the Republican Congress -- decisively installed by voters in November -- will take the form of blocking a wildly popular, actually shovel-ready infrastructure project.  And he'll try to claim that this is somehow evidence of Congress' unwillingness to work with him.  Delusional.  Then we had Jen Psaki at the State Department laboring mightily to answer questions about those 53 jailed Cuban dissidents the Castros supposedly agreed to free as part of Obama's& controversial deal to normalize relations the oppressive dictatorship -- which the Communists have publicly celebrated as a total win for their side.  As Katie mentioned yesterday, the US cannot say if the Cubans have upheld their meager end of the bargain.  Meanwhile, three Cuban spies have been released from US custody, and other American-led elements of the rapprochement appear to be moving full steam ahead.  My favorite part of this clip is when Psaki refers the reporter's questions about the promised prisoner release to the Cuban regime, which is so famously transparent and helpful in its interactions with the press.  Good luck with that, journalists.  And with that, we're back to the White House and Josh Earnest, fielding questions from Fox's Ed Henry regarding the schadenfreude-rich story we highlighted yesterday:


Earnest smirks through a lame joke, then dutifully repeats the "it's working" canard, replete with debunked credit-taking on slowing (but not falling) health costs. Rather than address the heart of Henry's question -- rising rates and out-of-pocket expenses for millions of consumers, even at Harvard, because of this law -- Earnest falls back on soporific talking points about the benefits of Obamacare.  I'll leave you with an item I included as an update yesterday, but deserves additional play.  Some liberals have objected to conservatives' admittedly gleeful citation of the Harvard story as an exercise in mindless hypocrisy.  Not so, explains Patrick Brennan:

Conservatives, Chait points out, would like consumers in general to pay for a greater share of their health care out of pocket, rather than consuming it through our byzantine tax-sheltered insurance system. Adrianna McIntyre, a health-policy writer formerly of Vox, says she’s therefore “baffled” that conservatives are taking the professors’ side in this debate. McIntyre and Chait may not be Harvard faculty (yet) but they’re smarter than this: Conservatives aren’t saying a $750 family deductible is too high or some great abuse. They’re saying it’s funny that Harvard professors think it’s too high, because said professors generally like Obamacare, and (according to Harvard) Obamacare is the reason their employer is raising it...Obamacare hiked the cost of health insurance (leaving aside subsidies) by implementing higher taxes and huge new regulations. Those meant higher deductibles and higher premiums. Conservatives therefore criticized both developments, even though sometimes they think other policies that produce higher deductibles are a good thing...Higher deductibles are definitely a bad thing when coupled with higher premiums and less choice brought on by a bad law, which is why the Harvard episode is not evidence that, as Chait claims, “Obamacare is implementing some versions of conservative ideas.”