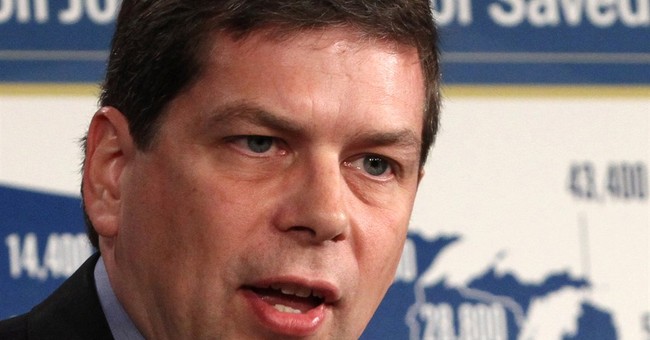 Well, this is awkward. Sen. Mark Begich is fighting for his political life up in Alaska, where he's trailed Republican challenger Dan Sullivan in the last four public polls.  At a recent candidate forum, the man with whom Begich will (sort of, see below) appear at the top of the ticket clumsily side-stepped a question about the state's US Senate race. After Republican Gov. Sean Parnell told the audience he'll be backing Sullivan for Senate, challenger Bill Walker was...noncommittal:


Question: I'd be interested in who each of you plan to vote for Senate.

Parnell: I'm voting for Dan Sullivan for US Senate. [Applause]

Walker: "I've heard that question asked in more creative ways, like what sign would be in our yard? The sign in my yard is going to be the Walker/Mallott for Governor and Lt. Governor sign, so that's what I'm going to say about that."


Walker, himself a (former?) Republican, is a running on an independent so-called "unity ticket" alongside a Democratic running mate.  His prospects depend on attracting enough Republican voters to oust the sitting GOP incumbent, so embracing Begich would be a major tactical error.  It would very well be the case that Walker's a Sullivan supporter, while his ticket-mate will vote for Begich.  Hence the maladroit evasion.  It's also not in the Walker/Mallott team's interests to tie themselves to a Democratic incumbent who's voted with an unpopular president 97 percent of the time. Begich has endorsed Walker; it appears the favor will not be returned.  Meanwhile, Begich is still fighting off criticisms over a highly controversial attack ad aired, then pulled, by his campaign, which has been denounced by everyone from Republicans to Jon Stewart.  The spot dishonestly tried to tie Dan Sullivan to an unspeakably brutal crime.  Politico explains the context:


The crime occurred in 2013. Jerry Active, who is charged with murdering the elderly couple and raping the young girl, had been released from prison after serving four years as part of a plea deal stemming from a 2009 sexual assault. The plea deal for the 2009 incident, arranged by prosecutors who worked under Sullivan, happened because of a clerical error that took place before Sullivan became attorney general. Sullivan was still on active duty in the Marines when the incorrect information was entered into the computer.


So the plea deal in question was rooted in a mistake that took place while Dan Sullivan was away from Alaska, serving the country in the Marines. He had nothing to do with it.  Oops. It also turns out that Begich didn't seek permission from the victims' family to highlight the crime in his advertisement, prompting an irate letter from the family's attorney.  In a contentious interview on local radio this week, Begich was pressed on whether he'd apologized to the grieving family for dragging their tragedy into the Senate race.  The Senator tried to deflect the question ("we're not going there") before finally admitting that he "didn't personally" apologize, sending an emissary instead:


I'll leave you with a few notes from other hot Senate races.  Mitch McConnell is out with a new, positive ad in Kentucky:


Colorado's Mark Udall, who's getting hammered for voting with President Obama 99 percent of the time, has already pledged to throw his full backing behind Obama's new Attorney General nominee...who hasn't been named yet.  He's pre-pledging blind support for whomever Obama nominates.  The definition of an unthinking rubber stamp:


And in Arkansas, a Tom Cotton commercial highlights the deleterious impact Obamacare is having on a local business, noting that Mark Pryor cast the deciding vote for the law:


A new poll out of North Carolina shows the Tar Hell State's Senate race virtually tied at (41/40), though Kay Hagan opens up a modest edge when leaners are pushed one way or the other.  The electoral models are looking good for Republicans at the moment, but it appears as though the GOP is once again getting swamped with ground game spending:

.@derekwillis with some startling numbers on the ground game: Dems outspending by > 8:1 in Iowa, Alaska, Colorado http://t.co/7UshgCW4el