It Begins: US Airstrikes Hit ISIS Artillery Targets Inside Iraq 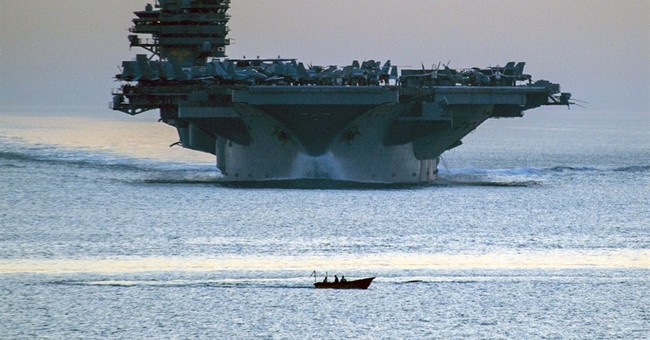 UPDATE - Another round of US strikes:


Last night, President Obama authorized an American military and humanitarian mission inside Iraq. Today, the bombing began with a pair of airstrikes on an ISIS artillery site near the Kurdish city of Irbil in the country's northern region. America's war in Iraq has resumed:

RT @BBCNewsGraphics: Location of US air strike on #IS Islamic militants in northern #Iraq http://t.co/szcudWL6Fa pic.twitter.com/qvgigyzQYf


ISIS, an astonishingly brutal Islamist group, is in the process of establishing a hardcore Caliphate across much of Syria and Iraq. Their goal is to establish Sharia law at the point of a gun, slaughtering "infidels" by the thousands, and showing no mercy. Click through for gruesome new images of ISIS' reign of terror and destruction -- a major content warning applies. Pure, unadulterated evil. These vicious radicals are murdering anyone who doesn't subscribe to their particularly virulent strain of Islam. They are engaged in ethnic cleansing and genocide. (In 2007, candidate Obama said preventing genocide wasn't a good enough reason to keep US troops in Iraq. Earlier this year, Obama compared ISIS to a JV basketball squad). One of the primary reasons the Obama administration finally decided to act was the high-profile plight of a religious minority group in Iraq whose people had been chased up a mountain and were encircled by extremists. Unable to flee, they've begun dying of hunger and thirst. Men, women, and children. The United States is intervening to help them, and to take military steps to fight ISIS. Until recently, Kurdistan was thought to be a secure area of Iraq, so US personnel (diplomats, advisers, etc) were deployed there. Given the terrorists' alarming advance and seizure of key infrastructure, the administration decided that it had no choice but to engage the enemy. The New York Times, on how dire things have become:

The crisis gripping Iraq escalated rapidly on Thursday with a re-energized Islamic State in Iraq and Syria storming new towns in the north and seizing a strategic dam as Iraq’s most formidable military force, the Kurdish pesh merga, was routed in the face of the onslaught. The loss of the Mosul Dam, the largest in Iraq, to the insurgents was the most dramatic consequence of a militant offensive in the north, which has sent tens of thousands of refugees, many from the Yazidi minority, fleeing into a vast mountainous landscape. In one captured town, Sinjar, ISIS executed dozens of Yazidi men, and kept the dead men’s wives for unmarried jihadi fighters. Panic on Thursday spread even to the Kurdish capital of Erbil, long considered a safe haven, with civilians flooding the airport in a futile attempt to buy tickets to Baghdad.


In short, a worst case scenario is playing out in Iraq, and the United States is trying to play catch-up to extinguish some of the fresh fires. Innocent Iraqis are terrified. A group worse than Al Qaeda is on the march and gaining steam, armed with American weapons taken from unprepared Iraqi forces. This was all predictable and avoidable. But for years, the Obama administration placed political considerations above national interests. Obama wanted to fulfill a popular campaign promise and pull out from Iraq completely, and he didn't let pesky details like securing a crucial status of forces agreement stand in his way. The world is now witnessing the bloody consequences of those decisions, and Obama is sufficiently cornered by his own actions that he's done the unthinkable: Re-engaging a war he's made a career out of opposing. In another irony, Obama's power to intervene is laid out in Congress' original Authorization of Military Force in Iraq, which the White House has actively sought to vitiate. This was their position as recently as last week. Moving forward with strikes is the right decision, and Obama should be commended for making it -- but the context that has forced his hand cannot be ignored.The question now becomes how far the US is prepared to take this mission. White House officials have been quoted as alternatively describing it as "very limited" in nature, and a "very long campaign." The top US military leader in Iraq is calling for the neutralization and defeat of ISIS:


The violent advances of Islamic militants in Iraq is not an isolated problem but rather a “growing global challenge” that needs to be dealt with, the top American general in Iraq told Army Times. “We must neutralize this enemy,” said Army Lt. Gen. Mick Bednarek, chief of the Office of Security Cooperation-Iraq in a Wednesday phone interview. “This is not just an Iraqi issue. This is not just a regional issue. This is a common enemy issue that we’ve got to address.” Islamic State fighters have advanced across the northern and western parts of Iraq, seizing control of cities such as Mosul and Fallujah. Estimated to have about 10,000 fighters across Syria and Iraq, the militants have consolidated control over large swaths of territory during the past several weeks. The group “is not just a violent extremist organization,” Bednarek said. “This is an army, and it takes an army to defeat an army.”


At least one powerful Democrat is echoing those sentiments, warning that the extremist threat isn't limited to the Middle Eastern region:

Feinstein says ISIS is recruiting fighters in Western countries, training them to possibly return to carry out attacks on Europe & America.

Sen. Dianne Feinstein on Iraq and ISIS: "It takes an army to defeat an army..."