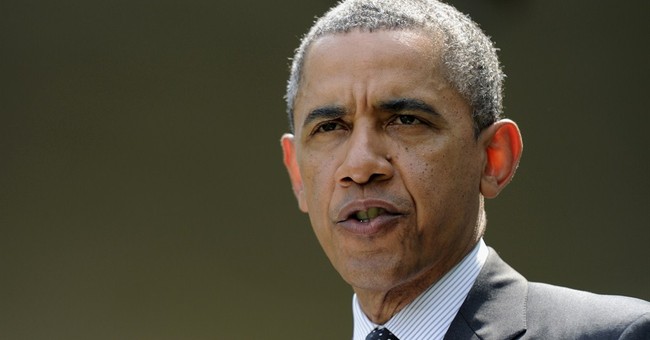 
In the fresh NBC/WSJ poll (see updates below on Hillary), Obama's approval slides to (41/53) -- which is tied for his lowest approval level ever in that series. He's at (41/54) on the economy, and a dreadful (37/57) on foreign affairs. A 54-percent majority say Obama is "no longer able to lead the country." For the umpteenth time, the president may have already attained effective lame duck status, but that doesn't make his polling irrelevant. Far from it. I've routinely pointed to political data analyst Sean Trende's formula that suggests a strong historical correlation between flagging presidential approval ratings and substantial Congressional gains for the opposition party:

[It] isn’t a perfect relationship, but presidential job approval is still the most important variable for how his party fares in midterm elections, explaining about half of the variance. The relationship is highly statistically significant: For every point in job approval the president loses, his party loses 0.6 percent of its caucus. (The chart doesn’t measure drop in job approval; just job approval.) So, at 60 percent, the president should lose 5 percent of his caucus; at 50 percent, it is around 12 percent of his caucus lost; at 40 percent, it’s about 18 percent of his caucus lost -- which would be 36 seats. Now the latter is highly unlikely to happen...As I’ve said before, this election isn’t going to be about sixth-year itches or any such electoral mumbo-jumbo. It’s going to be about presidential job approval, supplemented by the state of the economy (which also affects job approval to a degree) and how overexposed or underexposed the president’s party is. Right now, the second factor provides a drag beyond the president’s job approval, while the third factor will work heavily to Democrats’ advantage on Election Day...It is still far too early to speculate about how many seats Democrats will lose (or perhaps gain) in the 2014 elections. But if Obama’s job approval is 40 percent on Election Day, gains would be unlikely, and Democratic losses in the low double digits...would be plausible.


Republicans need to net six seats to reclaim the US Senate in November. The Pew Research Center is out with a new analysis that posits that a "dug in" electorate doesn't augur well for Democrats in 2014:

Since the Affordable Care Act was passed nearly four years ago, a plurality of Americans have disapproved of it. Since the onset of the Great Recession six years ago, more than 80% of Americans have rated economic conditions as only fair or poor. And since winning a second term, Barack Obama’s approval score has mostly been in the mid-40s or lower. One or more of these attitudes will have to move in a clearly positive direction for the Democratic Party to avoid a drubbing in the congressional elections, according to a new analysis of voter opinion. So far the indications for that are not so good. Recent months have shown signs of economic progress and indications that the Affordable Care Act has begun to achieve its goals. But there is little indication that the unemployment rate’s falling to 6.3%, the Dow Jones average soaring to a new high and the ACA signing up 8 million people, (including many young people,) had any effect on attitudes about these two key issues.


Perhaps the signs of "progress" cited haven't impacted attitudes because people either intuitively or explicitly understand what's really going on. For instance, the unemployment rate has dropped steadily because the US workforce participation rate continues to hover around a three-decade-plus low. People are leaving the workforce, and the official U-3 jobs number is "benefiting" from that effect. Most Americans simply don't believe the economy is improving. And on Obamacare, people know that its core promises have been broken, and that the White House's much-touted "milestones" aren't all they're cracked up to be. Not even close: A large majority of "new" exchange enrollees previously had insurance, a sizable chunk of them aren't actually enrolled, and millions of applications have been marred with complex data discrepancies. And, contra an assertion in the paragraph above, not that "many" young people have signed up for Obamacare, when compared to the administration's targets. Pew's write-up continues: "A special analysis of a recent Pew Research Center/USA Today survey suggests that these three factors are strong correlates of congressional preferences in 2014. Taken together, opinions about the national economy, the Affordable Care Act, and the president’s job performance accurately predict congressional voting intentions." Take a look at this chart, which isn't likely to reassure nervous Democrats:

But before conservatives get cocky, behold this headline: "Clinton Does Better Than Obama on Every Issue, Poll Says." On that note, I'll leave you with Allahpundit doing his Eeyore thing:


UPDATE - She may be a front-runner, but she's not politically bulletproof. Lots of room for the 2014 numbers to recede closer to 2008 levels, too:


New NBC/WSJ poll: Public divided on Hillary for 2016: 38% would definitely/probably vote for her; 37% say no chance