Christie on the Tonight Show: "You Bet" I Could Beat Hillary 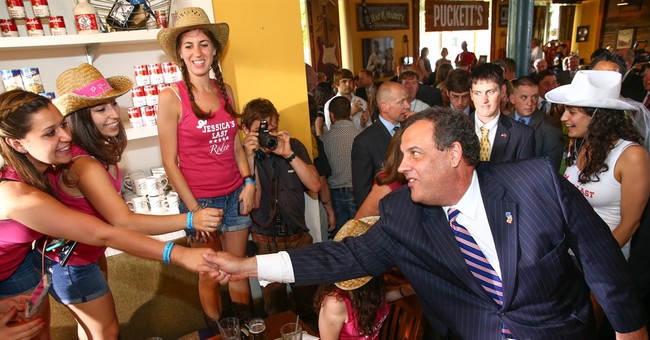 Chris Christie appeared on the Tonight Show last night, where he performed an elaborate bit with host Jimmy Fallon entitled, "the evolution of dad dancing." His moves included the "belt-grabber," the "passionate elliptical," and the "back it up." The punchline comes at the end, causing Christie to storm off in faux outrage:

Christie is savvy to poke some fun at himself over the "Bridgegate" controversy, which he's eager to put in the rearview mirror. His internal review exonerated him of any wrongdoing in the lane closure flap, and independent investigations have not turned up any evidence that he's been anything less than truthful -- and one of his accusers' credibility continues to crumble. During the interview portion of his appearance, Christie pointedly said that his kids are far more humiliated by his dancing than by the bridge scandal because he was actually involved in the former. Not a bad line. The exchange that's gotten the most attention, though, is Fallon's hypothetical question about whether Christie could beat Hillary Clinton in a theoretical presidential election. "Hypothetically? You bet," Christie replied, to cheers from some in the audience. I discussed that answer and Christie's dance moves on Fox News earlier (via Right Sightings' Steven Laboe):


Here's what I meant when I said that Christie's approval ratings have stabilized in New Jersey. Though he certainly sustained some damage from the bridge controversy, his numbers are relatively strong in the Garden State. He's nevertheless been taken down several pegs from his re-election highs, and as Richard points out in the discussion, he'd have to answer questions on guns, judicial appointments and Mediacaid expansion just to get through a GOP primary. Hillary's favorables, meanwhile, have declined steadily in a number of new polls. She's still in better shape than virtually every rumored GOP presidential candidate, but her erosion has been rather drastic -- partially because she's back under a partisan lens, and partially because people are being reminded that she's a vastly overrated retail politician. But will her peevish, tone-deaf approach and dearth of tangible accomplishments be enough to sink her? Time will tell, but I tend to agree with the insight below. She's not an especially good candidate. She's definitely not her husband. But given the "historic" nature of her would-be candidacy and Democrats' effectiveness at using identity politics to forge a victory coalition, her shortcomings might prove irrelevant:


Regardless, two-and-a-half years is a long time. Also, I meant what I said in the clip above. Boogying on late night television may seem un-presidential to some, but Republicans need to get over it. No matter who the GOP nominates in 2016, he must be willing to (and to some extent able to) play the pop culture game. Stunts like "pimp with a limp" didn't happen by accident.