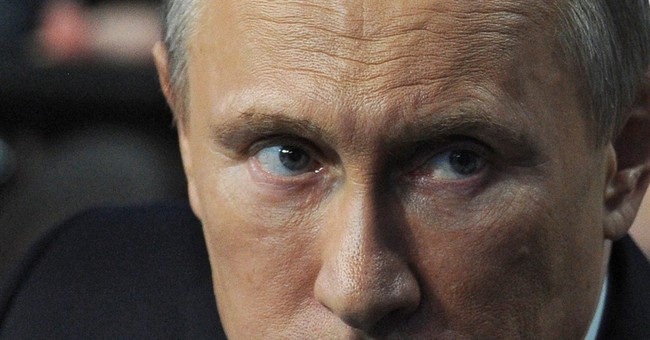 The first round of sanctions accomplished next to nothing, as Moscow retaliated in kind. Booting Russia out of the G8 didn't trigger a course correction either; just the opposite, in fact. With the Kremlin's bellicosity proceeding unabated, and Vladimir Putin's domestic approval rating floating in rarefied air, the West is once again moving to target Russia over its aggression in Ukraine. President Obama says the goal is to "change [Putin's] calculus:"

President Obama said his administration will today impose a new round of sanctions on Russia, targeting an “expanded list of individuals and companies,” with particular focus on some high-tech defense exports. The president, speaking during a joint press conference with President Benigno Aquino, said the sanctions will “remain targeted,” applied in coordination with European allies, though will not hit Russian President Vladimir Putin directly. The “goal is not to go after Putin personally, the goal is to change his calculus,” Obama said, “and encourage him to walk the walk and not just talk the talk when it comes to diplomatically resolving the crisis in Ukraine.” Obama said he wants Russia to support free and fair elections in Ukraine next month but that Putin has not embraced that path...The U.S. has threatened more sweeping sanctions on entire sections of Russia’s economy if its forces make further incursions into eastern Ukraine. Obama said today those remain on the table.


Putin's long-range objectives are a bit hazy beyond unapologetically embracing Russian revanchism via strategic irredentism. Exactly how long Putin can carry on delighting his domestic political audience with his strongman routine -- especially as the Russian economy falters badly -- remains to be seen. For a preview of Moscow's next moves and preferred tactics, be sure to read prescient and plugged-in New Republic correspondent Julie Ioffe. In the face of a blizzard of admonitions from the international community, the Kremlin has forged ahead with additional provocative moves. The Latvian government is accusing Russia of unleashing a trained force of "professional provocateurs" into the Baltic state, prompting the US to deploy 600 troops into the region. Like Ukraine, Latvia and several surrounding nations are home to significant Russian-speaking minorities. Countries like Latvia have ample cause for concern; photographic evidence appears to affirm what has been intuitively obvious to many -- the Russian operatives who are seizing government buildings in Easter Ukraine are the same people who orchestrated the illegal annexation of Crimea, and who plied their destabilizing trade in Northern Georgia back in 2008. The US military confirmed on Friday that Russian jets had violated Ukrainian airspace repeatedly over the span of 24 hours, while the British and Dutch Air Forces chased Russian planes away from their respective nations' territory. The latter incidents weren't necessarily unusual, but all of Moscow's actions are now viewed with deep suspicion throughout Europe. "Pro Russia insurgents" -- who, once again, are being egged on and directed by Russian special forces operators -- have also kidnapped a number of international military observers. The hostages were paraded in front of the cameras over the weekend. The Wall Street Journal is out with a strong editorial imploring Western leaders to get serious with Moscow's increasingly dangerous and desperate regime:

The U.S. and EU are saying they will impose new sanctions on Russia as early as Monday, albeit watered down again due to fears of economic harm in Europe. This continues the trend of incremental action that Vladimir Putin has consistently shrugged off. It also avoids the real need in the West for rethinking how to handle a revanchist Russia. The sanctions-by-small-degrees strategy continues the hope that Mr. Putin's Russia can somehow, with the right balance of carrots and sticks, be brought back into the European fold. In this view Mr. Putin is reacting understandably to Russia's post-Soviet decline in power and the West's NATO expansion. Ukraine and the rest of the Russian near abroad are part of the Kremlin's historic sphere of influence, so let Mr. Putin have them and after a slap on the wrist we can all return to business as usual. This is a false diagnosis wrapped in self-deception. It is how the West responded after the Russian invasion of Georgia in 2008, which President Obama downplayed as he entered office promising a "reset" of relations and offering concessions on arms control and missile defense while ignoring Mr. Putin's increasingly authoritarian grip at home.

Six years later, with nothing to show for the reset save a smaller U.S. missile force, Mr. Putin grabbed Crimea, and his special forces are now fueling unrest in eastern Ukraine...The lack of a united Western front weakens the impact of sanctions and feeds the belief of Mr. Putin and his oligarch coterie that they can ride out any short-term punishment. Yet Russia's economy is vulnerable to sanctions if the West would get serious. Standard & Poor's last week downgraded Russian debt to near-junk status, as capital flight picks up. A recession seems likely this year after slow growth in 2013. Sanctions against the Putin circle have their uses, but sanctions on the entire Russian financial system would have far more impact. Mr. Putin is riding a wave of nationalist popularity with his Crimea conquest, but that will erode if Russians conclude that his adventures are making them poorer. The West also needs to move faster on making Europe less dependent on Russia for energy.


Read the whole thing. The White House is insisting that its Russia policy is working (for what it's worth, they say the same thing about Obamacare), though really who believes Putin is trembling over intimidating tweets like this from the top State Department spokesperson:


"Smart power" is on a roll these days.