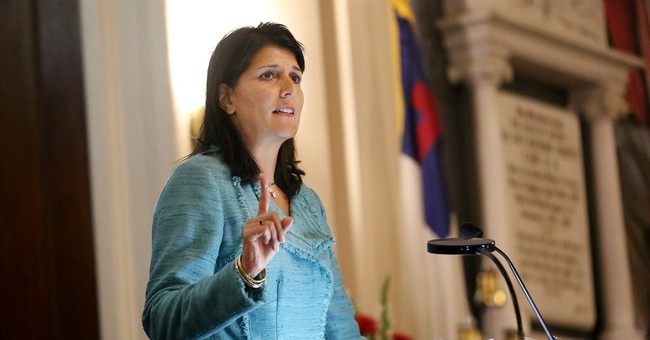 Should the Confederate Flag be removed from the grounds of South Carolina’s State Capitol?

Increasingly, many federal lawmakers and state leaders believe that it should be, as does the vast majority of Americans if recent polling is any indication.

And yet, the Confederate Flag is considered by some to be an emblem of Southern pride and tradition. Those in favor of keeping the Civil War relic where it is, however, faced a setback on Monday: The state's first female Republican governor publicly called for its removal.

“We do not need to declare a winner and a loser here,” Gov. Nikki Haley said in a joint press conference today with Sens. Lindsey Graham (R-SC) and Tim Scott (R-SC) standing by. “We respect freedom of expression, and for those who wish to show their respect for the flag on their private property, no one will stand in their way. But the Statehouse is different. And the events of this past week call upon us to look at this in a different way.”

However, while she did emphasize that the vast majority of South Carolinians who venerate the Confederate Flag are not bigoted or racist, she also made her wishes unambiguously clear.

“One hundred and fifty years after the end of the Civil War the time has come,” she said. “There will be some in our state who see this as a sad moment. I respect that. But know this: For good and for bad, whether it is on the Statehouse grounds or in a museum, the flag will always be a part of the soil of South Carolina.”

“But this is a moment in which we can say that that flag, while an integral part of our past, does not represent the future,” she added. “My hope is that by removing a symbol that divides us, we can move forward as a state in harmony—and we can honor the nine blessed souls who are now in heaven.”

Finally, she urged the state’s General Assembly to make removing the flag a top legislative priority, even threatening to use her executive powers unilaterally, if necessary, to have it taken down.

“There will be a time for discussion and debate, but the time for action is coming soon,” she said.