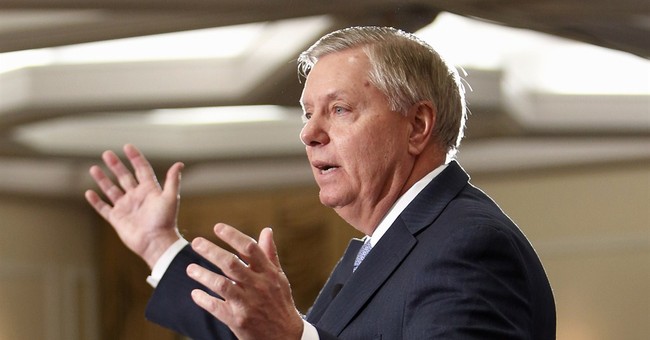 Sen. Lindsey Graham (R-SC) is one of the many long shot candidates vying for the GOP presidential nomination in 2016. As we've noted before, he has largely been written off by almost everyone, launching what many perceive to be a quixotic, pointless campaign for president.

Nevertheless, at a rally in his hometown of Central, South Carolina on Monday, he touted his expertise—“I have more experience with our national security than any other candidate,” he intoned—and commitment to destroying radical Islam as the principal justifications for officially entering the long slog ahead.

“Ronald Reagan’s policy of ‘peace through strength’ kept America safe through the Cold War,” he continued. “Remember those times? But I’ve come to conclude we will never enjoy peaceful co-existence with radical Islam, because its followers intend to destroy our way of life.”

Unsurprisingly, he also faulted and criticized the current administration for the proliferation of rogue states and armies—and of course, for leaving the nation more vulnerable to acts of terrorism after taking the oath of office.

“We made some dangerous mistakes in recent years,” he averred. “The Obama administration and some of my colleagues in Congress have substituted wishful thinking for sound national security strategy. Every day, the headlines attest to the failures of the Obama-Clinton policies.”

“It is sad for me to report to you that Barack Obama has made us less safe,” he added. “Simply put, radical Islam is running wild. They have more safe havens, more money, more capability, and more weapons to strike our homeland than any time since 9/11. They are large, they are rich, and they are entrenched. As president, I will make them small, poor, and on the run.”

Relatedly, too, he warned about the increasingly hostile rhetoric coming from Iran’s leaders while simultaneously pledging his unshakeable support for the state of Israel. “I will never abandon you,” he affirmed. But he also emphasized that if elected president, it will take more than just weapons to destroy our adversaries; it will take a smart, coordinated public relations campaign underscoring American values.

“I am running for president because I have the experience, the judgement, and the will to deny the most radical regimes the most dangerous weapons,” he said. “But to defeat this enemy it will require more than military might. The most powerful weapon in our arsenal isn’t a gun; it’s an idea. The terrorists are selling a glorious death, we must sell a hopeful life.”

“I know the players, I know our friends, and I know our enemies alike,” he added. “But most importantly, ladies and gentlemen, they know me.”

Interestingly, Sen. Graham spoke for about 20 minutes and didn’t mention an issue unrelated to foreign policy (or national security) for some 13 minutes. Thus, as a so-called Republican “war hawk,” Graham made it painstakingly clear what issues matters to him—and what kind of president he would be.

Whether the public likes what it sees and hears, however, remains to be seen.