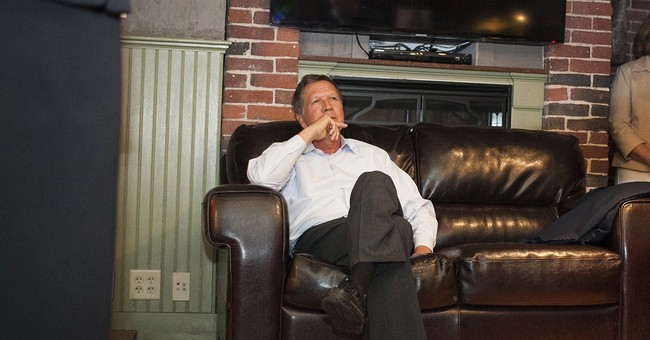 I can’t even keep track anymore. Seriously, now that Rick Santorum is already in, and George Pataki is about to be, the list of seemingly no-shot candidates running for president grows bigger by the day. The latest scoop, via the Washington Post, indicates that Ohio Gov. John Kasich (R) has decided, after some gut-wrenching and serious contemplation, that he, too, wants a shot at the nomination. As the Post reports, he’ll likely make it official sometime mid-summer:

Ohio Gov. John Kasich, who has been actively gauging reactions to a possible campaign for president in 2016, is now moving rapidly to assemble the staff and financial resources for such a bid and is looking to declare his candidacy sometime after June 30, according to knowledgeable Republicans.

The two-term governor and former House member is running through a checklist before formally entering the race, but strategists close to Kasich and other longtime friends say there is no doubt that he will soon join the crowded field of those vying for the GOP nomination.

Kasich, for his part, is scraping the bottom of the barrel in recent polling. Recent Quinnipiac and Fox News surveys position him at … 2 percent nationally. Thus, in a field of at least 15 other candidates -- with top tier contenders like Jeb Bush, Scott Walker, and Marco Rubio sucking up all the airtime -- it will be difficult for him to find a niche. But he does have a wild card up his sleeve, I suppose: He hails from Ohio.

And why does that matter? Well, because it’s pretty much a well established fact at this point that if Republicans lose the Buckeye State, they will lose the 2016 election. Can Kasich, therefore, use his geographical roots to his advantage? As the Post emphasizes, there’s also a lot to like about Ohio's incumbent governor, namely his experience in government and his commitment to the poor. And while this might be a bit of a problem, it’ll be interesting to see if he makes a splash in 2016 -- or flames out early as expected. We'll see.