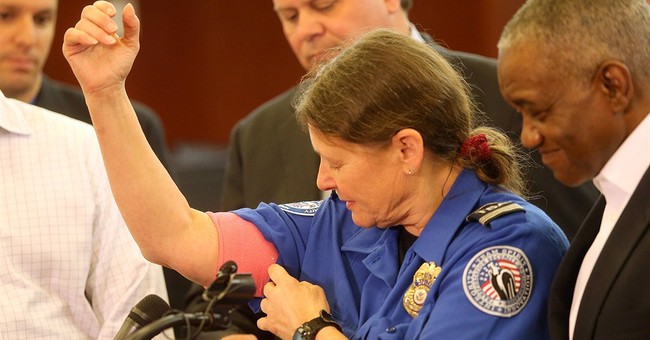 On Wednesday, the House Oversight and Government Reform Committee convened an important hearing on airport screening and surveillance entitled “Transportation Security: Are Our Airports Safe?”

Three witnesses testified—and while they did, on occasion, offer praise for the Transportation Security Agency (TSA), they were also concerned that it wasn't living up to Americans' expectations.

“Each day, TSA is required to screen about 1.8 million passengers and about 3 million carry-on bags at 450 airports nationwide,” John Roth, Inspector General of the US Department of Homeland Security, testified. “TSA faces a classic, asymmetric threat. It cannot afford to miss a single, genuine threat without potentially catastrophic consequences. Terrorists, on the other hand, only need to get it right once.”

“Unfortunately, although nearly 14 years have passed since TSA’s inception, we remain deeply concerned about its ability to execute its mission,” he continued. “Since 2014 we have published more than 115 audit and inspector reports about TSA’s programs and operations. We’ve issued hundreds of recommendations to attempt to improve TSA’s efficiency and effectiveness. We have conducted a series of covert penetration tests, essentially testing TSA’s ability to stop us from bringing in simulated explosives and weapons through checkpoints, as well as testing whether we could enter secure areas through other means.”

Their findings, however, were less-than-comforting.

“Although the results of those tests are classified—and we’d be happy to brief any member or their staffs in a secure setting with regard to our specific findings—we identified vulnerabilities caused by human and technology based failures.”

“Our audits have repeatedly found that human error—often a simple failure to follow protocol—poses significant transportation security vulnerabilities,” he added.

Jennifer Grover, for her part, Acting Director of Homeland Security and Justice at the US Government Accountability Office (GAO), also raised concerns about TSA’s ability to vet potential terrorists before they board US flights.

“Screening systems must work properly to deliver the security protections that they promise,” she said. “Over several years, GAO has found weaknesses in TSA’s oversight of its screening systems, raising questions about whether TSA is falling short in its ability to ensure aviation security. TSA has taken some steps to improve oversight of these systems, but additional actions are needed.”

Finally, president and CEO of New Age Security Solutions, Rafi Ron, testified that aviation security experts, and TSA, are not spending enough money and resources protecting flights from potential terrorists after they pass through security.

“While we invest billions of dollars every year in screening passengers, at the same time we leave the perimeter—I don’t want to say unattended—but I would say unattended to a satisfactory level,” he said. “What we actually do is invest all our resources on the front door, and leave the backdoor open.”

“But at the end of the day, it’s the same aircraft we are trying to protect,” he added.