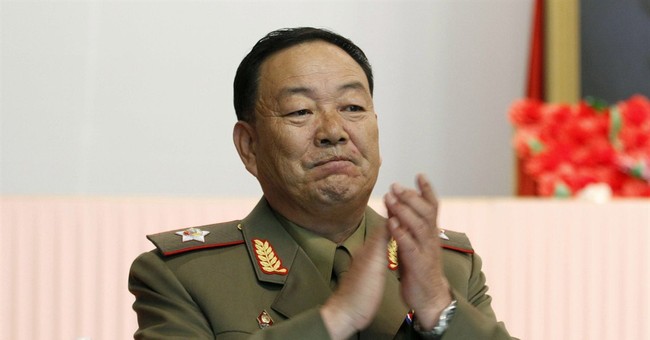 The cold-blooded executions ordered by North Korea’s Supreme Leader Kim Jong Un against his “enemies” have not stopped. Unsurprisingly. But after brutally killing is uncle (!) and second-in-command for traitorous activities, allegedly poisoning his aunt, and murdering more than a dozen or so “senior officials” last month, perhaps his paranoia is reaching dizzying and frightening new heights.

Why do I say that? Because he reportedly ordered a key member of his inner circle not to be executed by firing squad, but by heavy machine gunfire:

North Korean leader Kim Jong-Un had his defence minister executed with anti-aircraft fire for insubordination and dozing off during a formal military rally, South Korean intelligence said Wednesday, hinting at possible instability in the Pyongyang leadership.

If confirmed, it marks another demonstration of Kim's ruthlessness in dealing with even the most senior officials suspected of disloyalty, following the execution of his uncle and one-time political mentor Jang Song-Thaek in 2013.

The article goes on to describe—or at least try to describe—the ghoulishness of the execution:

In a briefing Wednesday to a parliamentary committee, Han Ki-Beom, the deputy director of NIS, said hundreds of people witnessed the execution of defence minister Hyon Yong-Chol, which was believed to have been carried out around April 30 at a military academy in northern Pyongyang.

Shot to pieces? How awful and inhumane.