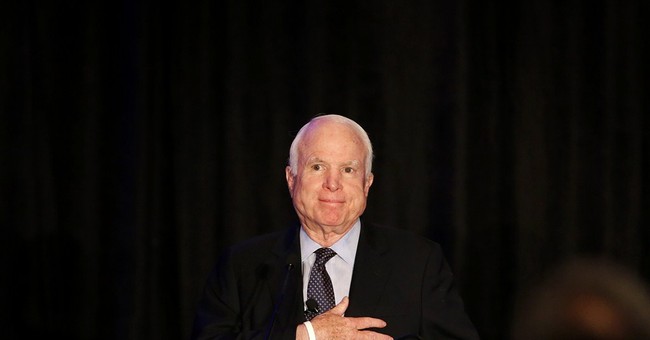 Sen. John McCain (R-AZ) has decided to troll conservatives and therefore will run for re-election in 2016. Despite his long tenure in Washington, however, he may be in “a lot of trouble,” according to a new PPP poll. While his numbers are perfectly fine among self-identified Right-leaning moderates, the fact that conservatives are angry with him and jumping ship might jeopardize his chances of winning a sixth term.

“It's his struggles on the right that have McCain imperiled,” the poll finds. “He gets narrowly positive reviews from both 'somewhat conservative' (51/37) and moderate (50/44) Republicans. But among those who identify themselves as 'very conservative,' just 21% approve of the job McCain is doing to 71% who disapprove. 83% of voters within that group say they would be more inclined to vote for an alternative on McCain's right next year compared to only 11% who actually say they would vote for McCain.”

That’s to be expected. After all, Arizona Republicans censored him last year because he was (ahem) too liberal, right around the same time he was surveyed as the least popular US Senator in Washington by his constituents.

Fortunately for him, however, not all is lost; he edges all of his presumptive Republican challengers.

“The good news for McCain is that he does lead all the prospective primary challengers we tested against him in head to head match ups, although some of them would clearly start out as toss ups,” the pollsters write. “McCain leads David Schweikert 40/39, Matt Salmon 42/40, Kelli Ward 44/31, and Christine Jones 48/27. Those tepid leads may be largely a function of the limited name recognition of his potential opponents though. Salmon has 52% name recognition, Schweikert 47%, Jones 44%, and Ward just 27%. Salmon (a +28 favorability at 40/12) and Schweikert (a +15 favorability at 31/16) are both far more popular than McCain among the voters who are familiar with them.”

Consequently, the poll finds that McCain is “at least hypothetically vulnerable” in 2016.

The numbers, my friends, don't lie.