New Poll Shows Why Rubio Could Possibly Win the Nomination 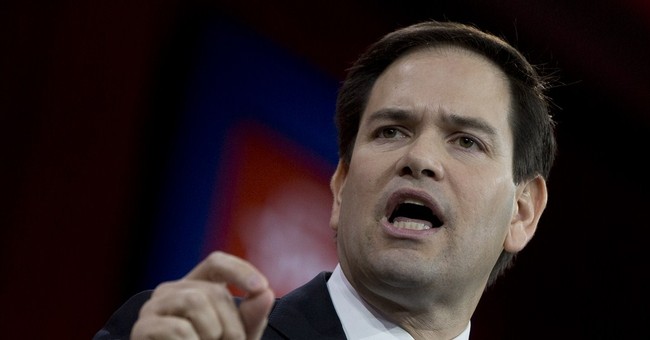 Scrolling through the latest NBC News/Wall Street Journal poll, which is making headlines for this reason, I found something rather interesting: GOP primary voters seem very open to the idea of supporting Sen. Marco Rubio (R-FL) in 2016: The junior Senator from Florida is a force to be reckoned with: Fully 56 percent of respondents could see themselves pulling the lever for him in 2016 while only 26 percent could not. And while Gov. Scott Walker’s (R-WI) numbers are a little better (after all, only 17 percent of respondents would completely rule him out in 2016), the survey suggests Rubio is an early favorite. It appears his gamble, therefore, is exceedingly well calculated.

Two other noteworthy tidbits: Opposition to Ben Carson running for president is remarkably and surprisingly low. Only 18 percent of respondents would definitively not vote for him, whereas a whopping 57 percent would not vote for Gov. Chris Christie (R-NJ). In fact, Christie seems to be a persona non grata among Republican primary voters. Only 32 percent of respondents say they’d be open to voting for him in 2016. What a difference an election cycle makes.

I’ll leave you with this. While the Republicans have a crowded and impressive field of candidates, the Democrats most assuredly do not. Sadly, however, most Democrats don’t seem to care all that much: