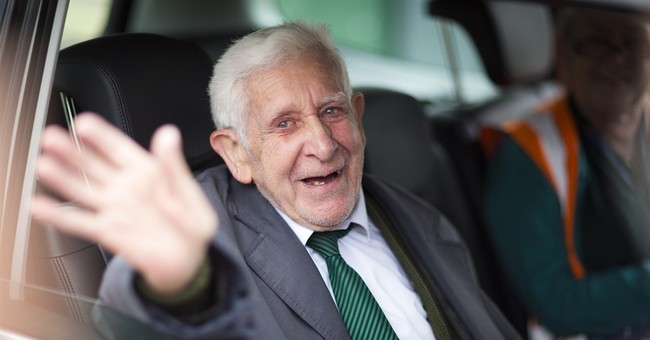 British D-Day veteran Bernard Jordan became something of an international celebrity when he mysteriously vanished from his nursing home seven months ago, only to later turn up in Normandy of all places. But since it was the 70th anniversary of the famed battle -- who among us could really blame him for wanting to be there?

Still, he didn’t go there seeking fame or media publicity or anything else; he went there only because he felt duty-bound. That's important to note.

Sadly, however, Jordan passed away this week. The New York Times reports:

A veteran of World War II who slipped away from a nursing home in England last year to attend the celebrations of the 70th anniversary of D-Day in France has died at the age of 90. Bernard Jordan, who became known as the Great Escaper after his escapade last June, died peacefully at The Pines, a care home in Hove, East Sussex, the hospital said in a statement.

His secret departure from the home to take a cross-Channel ferry to France, wearing his war medals under a gray raincoat, prompted a police search when the staff at the home reported him missing.

Mr. Jordan, who served in the Royal Navy, made his own way to Normandy, and his whereabouts was discovered only when a younger veteran telephoned during the night of June 5 to say that he had met Mr. Jordan, who was safe and would return when he was good and ready.

Mr. Jordan later said that he had gone to Normandy because “my thoughts were with my mates who had been killed. I was going to pay my respects. I was a bit off course, but I got there.”

Indeed he did, and his story became a trans-Atlantic sensation, even if that wasn’t his intention.

God bless him and may he find eternal peace.