In New Hampshire, Romney to the Rescue? 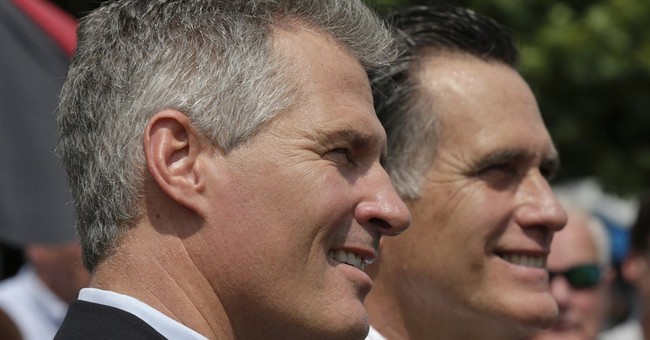 Can Scott Brown make an eleventh hour comeback and unseat the president’s most reliable rubber stamp in the US Senate? It’s a question Guy asked earlier today, and we really don't know. But Team Brown isn’t resting on their laurels after making the race competitive in recent months. They’re already making calls and cutting brand new web ads with the Republican Party’s most famous elder statesman: Mitt Romney.

You’ll recall that Mitt Romney launched his most recent bid for president in New Hampshire, won that state’s presidential primary in 2012, and actually lives there part-time. As an example of how popular he is in that part of the country, a poll conducted last summer showed nearly 40 percent of likely Granite State Republican voters would pull the lever for him if he ran in 2016; no other presumed candidate on the ballot even came close to that level of support.

So while Brown’s wrapped up endorsements from both Democrats and Tea Party conservatives, is there a better spokesman to make the case for Brown in 'live free or die' territory than Mitt Romney?

Guy has already spelled out just how close this race is. Save for one or two polls (which could be outliers), survey after survey shows every vote tomorrow will count.

Nothing less than majority-control of the US Senate could hang in the balance. This is why all eyes, once the polls close on Tuesday evening, will be glued to New Hampshire.