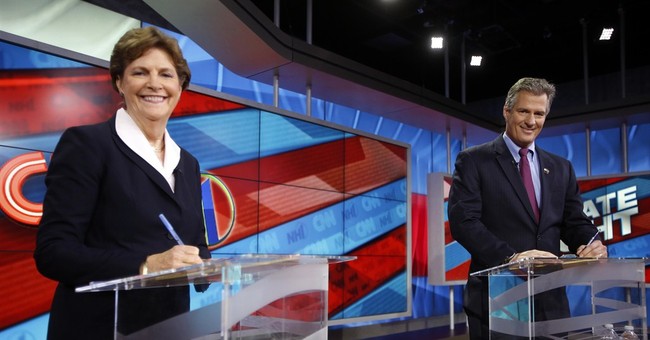 Serious question: Is there a closer Senate contest in the country than the one in New Hampshire?

Bear with me for a second. There have been three separate polls published in recent days. New England College gave Brown the edge (48/47); CNN/Opinion Research did not (49/47); and now, of course, the ARG survey has the race all tied up: The race is so close that Brown and Shaheen are essentially splitting the vote among every single demographic: 18 to 44-year olds (50/49), 45-year olds and older (48/48), and independents (47/51). To make matters even more complicated, the gender gap is evenly split (Brown has an 11 point advantage among men, Shaheen an 11 point advantage among women) and both candidates are showing strong support among the party faithful.

Tellingly, however, 51 percent of respondents believe Shaheen will ultimately win; 41 percent disagree and claim Brown will. The safe bet, then, is supposedly on the Democrat.

But this race hasn't broke either way yet -- although it could tonight. After all, tonight is the third and final debate between the candidates this month. And while the moderator is probably the worst choice ever, it is what it is.

Republicans are used to "impartial" moderators. And so is Brown.

UPDATE: Oh my. This just dropped this evening:

A new poll shows that U.S. Sen. Jeanne Shaheen is maintaining a lead over Republican challenger Scott Brown. The WMUR Granite State Poll shows Shaheen leading Brown 50-42 percent among likely voters. That's a 2-point increase over earlier this month, but the difference is still within the poll's margin of error.