Shaheen: Obama's Too "Busy" to Campaign For Me 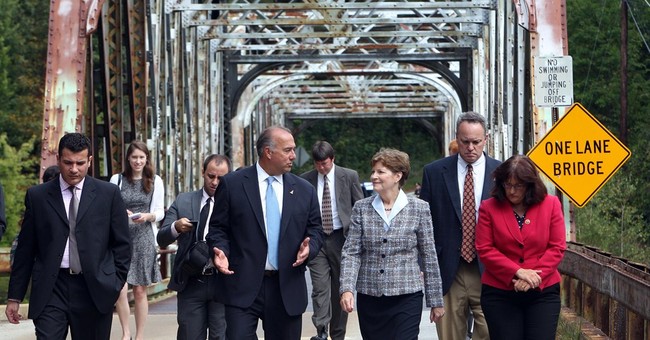 Concord, NH – Although tonight’s debate was closed to the public – i.e., there was no live television studio audience – one thing was clear from being on the ground in New Hampshire: Unlike two nights ago, Scott Brown fans were there and energized. It may be hard to see, but one Brown supporter (below in the red rain jacket) was wielding a microphone, leading “Go Scott Go” chants hours before the cameras rolled.

In the background, you can see where the debate is being held (alas, I did not gain access myself), and to the far left (not shown) is where Team Shaheen supporters gathered. My sense is that there were actually more Brown supporters at the venue tonight than Shaheen supporters, but since (again) the debate was closed to the public, it should be noted that most people planned to watch the debate from home. Indeed, one of the security guards told me most of the journalists from the major New Hampshire newspapers weren’t even bothering to show up.

In any case, tonight’s debate was markedly different from two nights ago. Perhaps because there was no studio audience, both candidates seemed more subdued and less inclined to go on the attack. I also think Sen. Shaheen stumbled a bit. For example, the moderator, Wolf Blitzer, asked her if she wanted President Obama to come campaign for her. This is what she said:

She also said she was “proud” of her partisan record.

Still, Blitzer didn’t let Brown off the hook, either. For instance, while he routinely says on the campaign trail his opponent votes with the president “99 percent of the time,” Blitzer confronted him with the unsavory fact that during his last year in Washington, he voted…78 percent of the time with President Obama. This was a clever question that undercut one of the most widely-touted themes of his campaign – namely, that he was once the most bipartisan senator in Washington.

Interestingly, the candidates spent the first 15 minutes of the debate talking about either Ebola or ISIS. This was a bit surprising. They also discussed immigration, border security, the minimum wage, and jobs and the economy. On these issues, I cannot remember anything memorable happening. They both did well.

For what it's worth, the candidates will debate one more time before Granite Staters head to the polls. But I'll leave you with this, which gives some indication of who the winner was:

Shaheen and her campaign took off, aren't talking to reporters after debate.