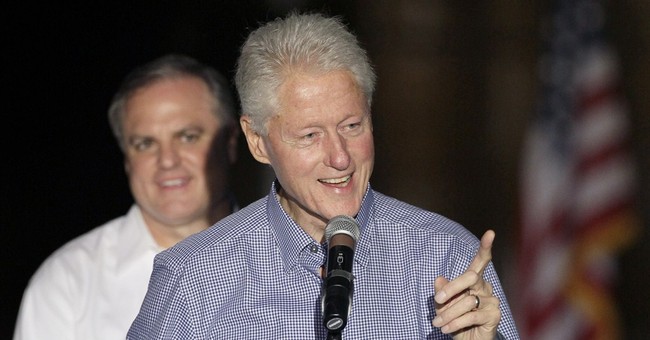 Two Democrats running for US Senate seats (who are expected to benefit the most from a Clintonworld endorsement) may be on the verge of losing, The Hill suggested in an op-ed published this weekend (via Noah Rothman):

Self-proclaimed Clinton Democrats are struggling this election cycle, and not even their powerful namesakes may be enough to save them.

Both Bill and Hillary Clinton have tried to turn on their charms to help centrist Democrats in Kentucky and Arkansas. But as candidates in both states are slipping, help from the party’s preeminent power couple is falling short. ….

Despite their close ties to the Clintons, their efforts to distance themselves from a deeply unpopular current president may not work.

And why not? One possible reason is because both candidates are struggling to portray themselves as independent-minded candidates. In Arkansas, for example, Sen. Mark Pryor has been routinely accused by the Cotton campaign of rubber stamping the administration’s agenda and casting the deciding vote for Obamacare. He is not, in other words, living up to his own slogan that “Arkansas Comes First.” By contrast, Team Pryor has sought to parlay these attacks by taking selfies with the former US president and emphasizing his record of bipartisanship. But these efforts will perhaps be in vain, as Noah Rothman explained over at Hot Air:

…What is instructive ahead of 2016 are those Democrats who are enthused to turn out in support of liberal candidates this cycle. It’s not pro-Clinton moderates, but Obama-backing progressives who are most likely to head to the polls despite anti-Democratic headwinds.

This is why Clinton's continued support for Pryor may fail to meaningfully tip the scales; after all, the kind of voters the former president's desperately trying to win over for him...may not even vote. Meanwhile, unfortunately for Pryor, recent polling indicates his Republican challenger is in fine shape, edging him in four of the last five polls conducted in the state.

Team Cotton therefore has the momentum, and it remains to be seen what, if anything, the Clintons can do about it.