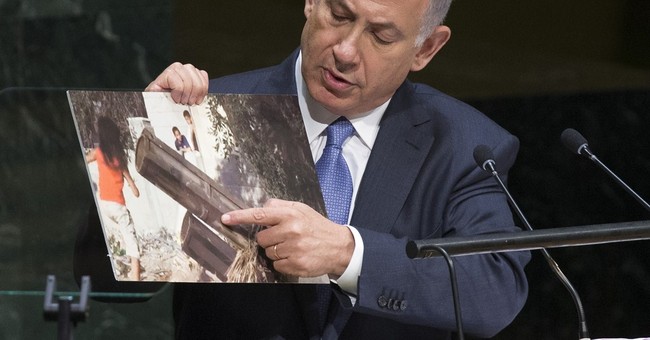 “I come here from Jerusalem on behalf of my people, the people of Israel,” he began. “I’ve come here to speak about the dangers we face, and the opportunities we seek. I’ve come here to expose the brazen lies spoken from this podium against my country and the brave soldiers who defend it. “

“Militant Islam is on the march,” he declared. “To protect the security and peace of the world, we must remove this cancer before it’s too late.”

He explicitly said that Hamas and militant Islam are “branches from the same poisonous tree,” and that the “same global ambition” that actuates Hamas -- namely, world domination -- runs through all terrorist organizations ... including ISIS.

“Hamas is ISIS; ISIS is Hamas,” he boldly declared. “They all share a fanatical ideology where there is no freedom and tolerance.”

And yet he acknowledged that this concept would be difficult for some ideologues to comprehend.

“Militant Islam’s ambition to dominate the world seems mad,” he admitted. “But so too did the global ambitions of another fanatical ideology.”

“The Nazis believed in a master race,” he said. “The radical Islamists believe in a master faith.”

As expected, he left no stone unturned and therefore publicly eviscerated the Republic of Iran, condemning their faux concerns about the rise of global terrorism.

“To say that Iran doesn’t practice terrorism is like saying that Derek Jeter didn’t play short stop for the New York Yankees,” he said. “So don’t be fooled by Iran’s manipulative charm offense. It’s designed for one purpose and one purpose only: to lift the challenges and lift the obstacles to Iran’s path to the bomb.”

“Once Iran produces atomic bombs, all the charms, and all the smiles, will suddenly disappear,” he continued. “And it’s then that the ayatollahs will show their true face and unleash their aggressive fanaticism on the entire world.”

Thus, he implored the international community to take this threat seriously and work with Israel to prevent Iran from attaining nuclear weapons.

He also addressed the recently-concluded, 50-day war between Israel and Hamas.

He defended his country’s right to defend itself while also confronting the lies spread about Israel’s war practices. Moreover, he blasted the UN Human Rights Council for investigating Israel for war crimes, when Hamas routinely fired rockets from UN schools, executed political dissidents, and used children as human shields.

“No other country and no other army have gone to greater lengths to avoid casualties against the civilian populations of their enemy,” he intoned. “Israel’s soldiers do not deserve condemnation, but admiration from decent peoples everywhere.”

And yet, despite Israel’s attempts to save innocents, the rise of anti-Semitism in supposedly civilized countries worldwide is unmistakable, he said.

“We hear mobs today calling for the gassing of Jews, we hear some national leaders compare Israel to the Nazis,” he averred. “This is not a function of Israel’s policies; it’s a function of diseased minds.”

He therefore labeled this age-old and ugly hatred by its rightful name: anti-Semitism.

“In the past outrageous lies against the Jews [led to] the wholesale slaughter [of my people],” he added. “But no more. Today, the Jewish people have the power to defend ourselves, and we will defend ourselves on the battlefield [and] in the court of public opinion.”

“Israel will continue to stand proud and unbowed,” he said.