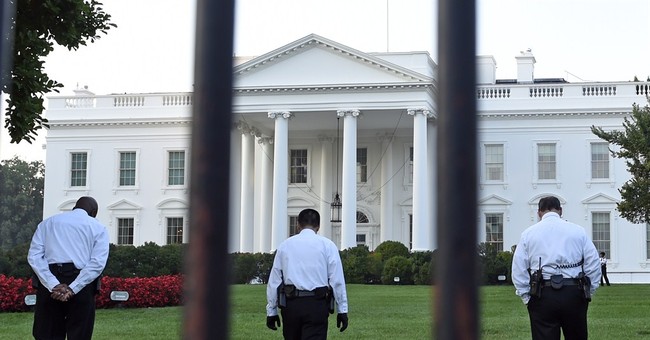 Last week, an Iraq War veteran, allegedly with PTSD, hopped the White House fence wielding a three-and-a-half inch pocketknife. The break-in was captured on camera and, alarmingly, the perpetrator made it all the way inside the building before he was taken into custody. Thankfully, the first family was not at home at the time of the breach -- but many of the protocols put in place to prevent against dangerous and malicious actors from accessing the White House were not followed. This failure in communication and judgment is reportedly leading top brass at the Secret Service to weigh sweeping policy changes that will ensure something like this never happens again (via the NYT):

The Secret Service is considering screening tourists and other visitors at checkpoints before they enter the public areas in front of the White House in response to the episode Friday in which a man with a knife managed to get through the front door of the president’s home after jumping over the fence on Pennsylvania Avenue, according to law enforcement officials. As part of the screening, the Secret Service would establish several checkpoints a few blocks from the White House, the officials said. The screening would likely be limited to bag checks and not include measures taken at airports by the Transportation Security Administration, which include metal detectors and body scans.

Along with giving Secret Service agents and uniformed Secret Service officers a chance to check for explosives and weapons in bags, the screening would allow them to interact with the visitors and try to identify those who may pose a problem, the officials said. The officials spoke on the condition of anonymity because they did not want to be identified discussing a continuing investigation or security measures under consideration.

In all honesty, how could this happen? That’s pretty much what everybody is asking. This man not only breached the fence; he made it inside. How?

As noted above, one reason, it seems, is because standard operating procedures were inexplicably abandoned:

According to officials briefed on the review, one of the biggest questions senior Secret Service officials want answered is why officers on the grounds did not deploy attack dogs that are specifically trained to stop intruders, even those sprinting across the White House lawn. At all times, there are several muzzled Belgian Malinois on the White House grounds, officials said. The early assessment by senior agency officials is that the dog handlers should have quickly removed the muzzles and unleashed the dogs.

Agency officials are also puzzled as to why the guard at the front door of the White House did not follow procedure and lock the door as soon as an alarm signaled that someone had breached the fence.

“[I]n my wildest dreams," David Axelrod said today on MSNBC, "I never imagined that someone could do what this guy did.”

For what it's worth, I'm sure most Americans feel the exact same way.