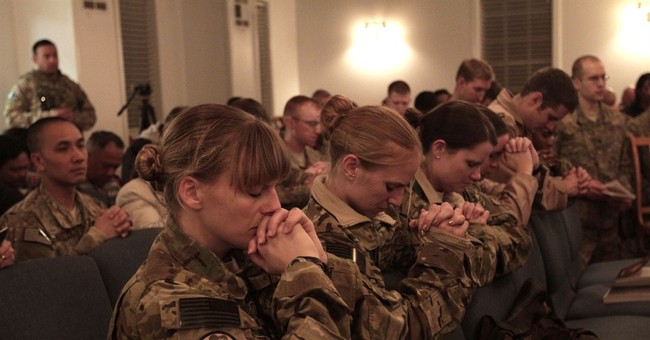 My visceral reaction to reading this story was intense anger. And yet, why am I bewildered that a terrorist organization that kills innocents has reportedly stepped up its efforts in urging rogue extremists in the U.S. to target American soldiers?

On second thought, I’m not surprised at all. But that doesn’t mean I don’t find their their latest tactic to kill Americans somewhat strange. Is this not the same army of barbarians whose chief spokesman (since killed in a drone strike) arrogantly prodded the president to “send [us] your soldiers, the ones we humiliated in Iraq?” If ISIS is so confident and proud of their own military capabilities, why must they resort to such cowardly and desperate acts?

Fox News has the exclusive:

A law enforcement bulletin obtained by FoxNews.com warned that Islamic State fighters have increased calls for "lone wolves" to attack U.S. soldiers in America in recent months, citing one tweet that called for jihadists to find service members' addresses online and then "show up and slaughter them."

There will be “a continued call - by Western fighters in Syria and terrorist organizations - for lone offender attacks against U.S. military facilities and personnel,” warned a July law enforcement intelligence bulletin from the Central Florida Intelligence Exchange, a state-run agency that gathers, assesses and shares threat information and works with the Department of Homeland Security. “These threats will most likely increase should the U.S. or its allies attack the Islamic State of Iraq and Sham (ISIS) in Syria or Iraq.”

Given what happened yesterday in Australia, the West must be ever-vigilant and on its guard against coordinated and “lone wolf”-style terror attacks from ISIS. Our soldiers, it seems, are now top targets.

And while not wholly unexpected, this is something all of us should bear in mind.