IG Report: No One Died From Delays in Care at the Phoenix VA 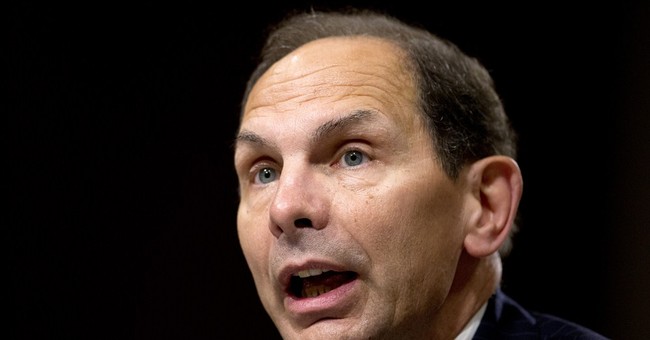 The Department of Veteran's Affairs (VA) has published its own preliminary report concluding that zero veterans died from delays in care at their facility in Phoenix, Arizona. This is a remarkable conclusion, I think, not least because when the story first broke in April, it was widely reported that at least 40 veterans died needlessly from negligence and interminable wait-times.

Nevertheless, the federal agency’s “independent office,” which was charged with investigating these allegations, is sticking to their initial findings:

The Department of Veterans Affairs says investigators have found no proof that delays in care caused any deaths at a VA hospital in Phoenix, deflating an explosive allegation that helped expose a troubled health care system in which veterans waited months for appointments while employees falsified records to cover up the delays. Revelations that as many as 40 veterans died while awaiting care at the Phoenix VA hospital rocked the agency last spring, bringing to light scheduling problems and allegations of misconduct at other hospitals as well. The scandal led to the resignation of former VA Secretary Eric Shinseki. In July, Congress approved spending an additional $16 billion to help shore up the system.

The VA's Office of Inspector General has been investigating the delays for months and shared a draft report of its findings with VA officials. In a written memorandum about the report, VA Secretary Robert A. McDonald said: "It is important to note that while OIG's case reviews in the report document substantial delays in care, and quality-of-care concerns, OIG was unable to conclusively assert that the absence of timely quality care caused the death of these veterans."

The language McDonald uses here is rather precise, isn’t it? According to the Inspector General’s report, he asserted, there was no “conclusive" evidence that veterans died because of delays. And yet, this contention is directly contradicted by anecdotal evidence -- an imprecise yet nonetheless compelling sign that the IG report is far from credible.

Take, for example, the tragic and preventable case of Thomas Breen -- who was denied care for a period of months, which his relatives ultimately conclude directly contributed to his death. Guy linked to this heartbreaking CNN piece in his write-up last spring:

Teddy says his Brooklyn-raised father was so proud of his military service that he would go nowhere but the VA for treatment. On September 28, 2013, with blood in his urine and a history of cancer, Teddy and his wife, Sally, rushed his father to the Phoenix VA emergency room, where he was examined and sent home to wait…Thomas Breen died on November 30. The death certificate shows that he died from Stage 4 bladder cancer. Sally says her father-in-law realized toward the end he was not getting the care he needed. "At the end is when he suffered. He screamed. He cried. And that's somethin' I'd never seen him do before, was cry. Never. Never. He cried in the kitchen right here. 'Don't let me die.'" Teddy added his father said: "Why is this happening to me? Why won't anybody help me?"

Infuriating. At the same time, here’s what another whistleblower told CNN about the culture of silence and corruption specifically at the agency’s Phoenix branch:

"Deceased" notes on files were removed to make statistics look better, so veterans would not be counted as having died while waiting for care, Pauline DeWenter said.

DeWenter should know. DeWenter is the actual scheduling clerk at the Phoenix VA who said for the better part of a year she was ordered by supervisors to manage and handle the so-called "secret waiting list," where veterans' names of those seeking medical care were often placed, sometimes left for months with no care at all.

For these reasons, DeWenter is among the most important and central people to the Phoenix VA scandal over a secret wait list, veterans' wait times and deaths. Despite being in the center of the storm, DeWenter has never spoken publicly about any of it -- the secret list, the altering of records, the dozens of veterans she believes have died waiting for care -- until now.

These are merely two examples casting doubt on the VA Inspector General’s “independent” report. Meanwhile, Sen. Tom Coburn (R-OK) conducted a yearlong, independent study of his own. And what did he discover? A full-blown scandal in its own right: “Over the past decade,” he claimed, “more than 1,000 veterans may have died as a result of VA malfeasance.”

The problems at the VA, therefore, are systemic and far from resolved. And while the VA can contend that veterans didn’t die on their watch (at least in Phoenix, Arizona), I don’t think one government report released by the agency's own oversight office is necessarily going to exonerate them.