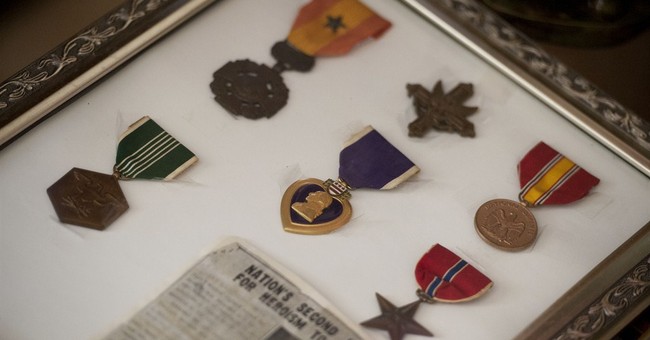 Prepare to be enraged by this exclusive investigative report from CNN. As Allahpundit notes, the media has been documenting the VA's egregiously poor treatment of our veterans for some time, blowing the whistle on horrific conditions and scandalously long wait times for care. But the new revelations introduce an additional, more sinister, element into the equation: Lethal, ass-covering corruption. An absolute disgrace:

At least 40 U.S. veterans died waiting for appointments at the Phoenix Veterans Affairs Health Care system, many of whom were placed on a secret waiting list. The secret list was part of an elaborate scheme designed by Veterans Affairs managers in Phoenix who were trying to hide that 1,400 to 1,600 sick veterans were forced to wait months to see a doctor, according to a recently retired top VA doctor and several high-level sources ... Internal e-mails obtained by CNN show that top management at the VA hospital in Arizona knew about the practice and even defended it. Dr. Sam Foote just retired after spending 24 years with the VA system in Phoenix. The veteran doctor told CNN in an exclusive interview that the Phoenix VA works off two lists for patient appointments: There's an "official" list that's shared with officials in Washington and shows the VA has been providing timely appointments, which Foote calls a sham list. And then there's the real list that's hidden from outsiders, where wait times can last more than a year.


So this branch of the VA operated an off-the-books list in order to mask atrocious realities and deflect public scrutiny. (Was the Phoenix division the only one that used this ploy?) It gets worse:

According to Foote, the elaborate scheme in Phoenix involved shredding evidence to hide the long list of veterans waiting for appointments and care. Officials at the VA, Foote says, instructed their staff to not actually make doctor's appointments for veterans within the computer system. Instead, Foote says, when a veteran comes in seeking an appointment, "they enter information into the computer and do a screen capture hard copy printout. They then do not save what was put into the computer so there's no record that you were ever here," he said. According to Foote, the information was gathered on the secret electronic list and then the information that would show when veterans first began waiting for an appointment was actually destroyed...Foote adds that when veterans waiting on the secret list die, they are simply removed...Foote said that the number of dead veterans who died waiting for care is at least 40.


They went to great lengths to avoid keeping accurate records, and when veterans died of neglect, their secret files simply disappeared. Their paper trail was destroyed. The CNN story profiles one victim of this scheme -- and as a fair warning, some these quotes are excruciating to read:

Teddy says his Brooklyn-raised father was so proud of his military service that he would go nowhere but the VA for treatment. On September 28, 2013, with blood in his urine and a history of cancer, Teddy and his wife, Sally, rushed his father to the Phoenix VA emergency room, where he was examined and sent home to wait. "They wrote on his chart that it was urgent," said Sally, her father-in-law's main caretaker. The family has obtained the chart from the VA that clearly states the "urgency" as "one week" for Breen to see a primary care doctor or at least a urologist, for the concerns about the blood in the urine. "And they sent him home," says Teddy, incredulously. Thomas Breen died on November 30. The death certificate shows that he died from Stage 4 bladder cancer. Sally says her father-in-law realized toward the end he was not getting the care he needed. "At the end is when he suffered. He screamed. He cried. And that's somethin' I'd never seen him do before, was cry. Never. Never. He cried in the kitchen right here. 'Don't let me die.' " Teddy added his father said: "Why is this happening to me? Why won't anybody help me?"


Once you've recovered from your entirely justifiable fit of rage, allow me to make two points. First, a non-partisan observation: Our veterans -- men and women who served this country to protect and defend our freedoms -- deserve much, much better than this. Those responsible for these shameful policies in Phoenix are criminals, and should be treated as such. (The director of this division received $9,345 in bonuses last year, according to records). The federal government ought to launch an immediate and unsparing investigation into the entire VA system to see if Phoenix's worst practices were adopted elsewhere. Accountability should be swift, thorough, and painful for the guilty. This cannot stand. And now, a more ideological point: American public opinion is fractured on healthcare policy. Obamacare is deeply divisive, and most Americans don't believe it's the federal government's role to provide universal healthcare to all of its citizens. But there are a few areas of broad consensus on health policy, one of which is keeping faith with our veterans. They've earned our help. The VA is one form of "single payer," government-run healthcare that most people support. Yet it's a wreck. It's failing the very people we virtually all agree deserve to be covered on our dime. One of the president's big campaign promises in 2008 was to reduce backlogs at the VA. According to left-leaning fact-checker Politifact, the problem has only intensified during the Obama presidency.

Elsewhere, our Native American health system is another single-payer-esque system operating under the auspices of the federal government. It's woefully under-funded, and its "beneficiaries" darkly joke that one shouldn't get sick after June, when the annual budget runs out. Medicare is another single-payer system. It's quite popular. It's also knocking on the door of insolvency, and must be reformed to avoid a fiscal implosion. And liberal Vermont's proposed single-payer dream is dying because the state has no way to pay for it. Government-run healthcare systems result in longer wait times, fewer choices, doctor shortages, less innovation and rationing. Those are facts. The reality that our federal bureaucracy can't even support and sustain a non-disgraceful VA -- a rallying point for Americans of all political stripes -- should be a wake-up call for those who'd push the nation toward a single-payer regime. One major political coalition is wedded to that ideological goal: