US Official: US Arming Kurdish Forces in Iraq 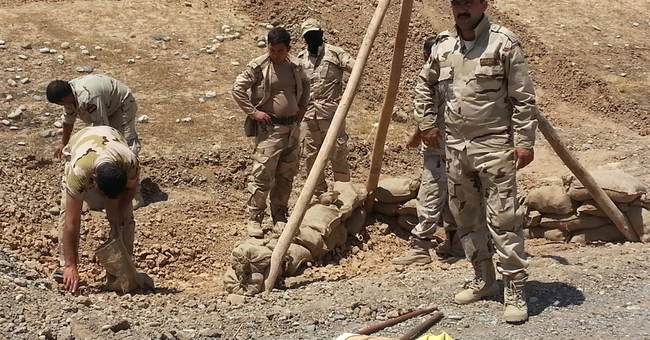 Over the weekend, President Obama announced he had authorized additional and targeted air strikes in northern Iraq, and would continue providing humanitarian relief. Both efforts, he argued, were necessary to protect the region’s ethnic minority population from being massacred or succumbing to the elements.

And yet, in the long-term, perhaps the most effective strategy to stem the tide of bloodshed in northern Iraq (save from putting American boots on the ground) is to provide the Kurds with the arms and weapons necessary to turn the tide of the war. And that, in turn, is exactly what the US is reportedly now doing:

The United States is sending weapons to Kurdish forces in Iraq who have begun to roll back gains made by Sunni militants, a senior U.S. official confirmed to Fox News.

A senior State Department official told The Associated Press that the Kurds are "getting arms from various sources. They are being rearmed."

Providing weapons to Kurdish forces is a reversal of U.S. policy, which previously had only allowed for selling arms directly to the Iraqi government. In recent days, the U.S. military has been helping facilitate weapons deliveries from the Iraqis to the Kurds, providing logistical assistance and transportation to the north.

Sources say the weapons from the U.S. will not be provided directly from the Pentagon. Officials wouldn't say which agency is spearheading the effort, though the CIA historically has done similar arming operations.

The situation in Iraq, meanwhile, is becoming increasingly more complicated given the nation’s political instability. Prime Minister Nuri al-Maliki, for his part, is unwilling to relinquish the reins of power, or so it seems, taking steps to bolster and solidify his position in what many are now describing as a political coup. As alarming as that prospect might sound, however, it may, in a sense, be welcome news in Washington:

A coup in Iraq would make things easy for the U.S. Abandon Maliki and deal with the Kurds exclusively from now on

But it isn't enough to merely "abandon Maliki." The U.S. must also stand firmly behind the country’s newly elected president to begin loosening ISIS' foothold in Iraq -- which, as it happens, is exactly what the State Department is already doing (via Ed Morrissey):

Masum's election on Thursday is another step towards forming a government which could see the embattled Maliki replaced as prime minister, even though his party won the largest bloc in April parliamentary elections.

"We stand absolutely squarely behind President Masum (who) has the responsibility for upholding the constitution of Iraq," Kerry said in Sydney, where he will attend annual US-Australia military talks.

"He is the elected president and at this moment Iraq clearly made a statement that they are looking for change."

Maliki, who has been under huge pressure to give up his bid for a third term in office, announced his plans to file a complaint to the federal court in a surprise address at 2100 GMT Sunday.

On Sunday, the Kurds pushed back ISIS militants a few dozen miles from the city of Irbil, and recaptured two towns in Northern Iraq. Thus, U.S. strategic and military efforts seem, at least for the moment, to be making an impact.