McCain: We Should Never Have Released the Taliban Five 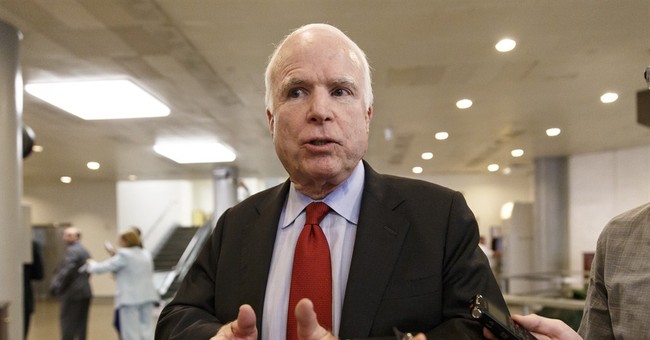 There has been considerable backlash against the president of the United States for releasing the “Taliban Five” in exchange for the freedom of Army Sgt. Bowe Bergdahl. The reasons are at least threefold: he surreptitiously expedited the deal by cutting out senior US national security and military officials who may or may not have raised objections; failed to inform Congress thereby circumventing federal law; and justified his decision to act unilaterally and without congressional authorization on the most tenuous of grounds. These are some of the concerns that have both Republican and Democratic lawmakers reeling. But far more chilling is the fact that these ruthless terrorists, two of whom are wanted for war crimes, are now on the loose; and, in a year from now, will almost certainly be waging Jihad against the United States and her allies. One of these thugs has already pledged to do just that.

Many lawmakers have expressed concern with the prisoner negotiations, careful to criticize how the deal went down -- but not necessarily willing to criticize outright the principle of securing an American GI at so high a cost. Not Sen. John McCain (R-AZ). Yesterday he told CNN’s Candy Crowley that under no circumstances should these terrorists have been released, with or without Congress’ approval, because of the dangers they pose to the homeland -- and to our men and women in uniform serving overseas:

It should be noted that McCain has changed his position on the Bergdahl deal multiple times. Still, he spent five years as a POW during the Vietnam War. He therefore understands the brutality and anguish and hopelessness of captivity better than most. So if he’s willing to go as far as to say that bringing home an Americans GI at any cost is not an effective strategy for combating terrorism, perhaps that underscores just how concerned he is about these monsters -- and how dangerous they really are.