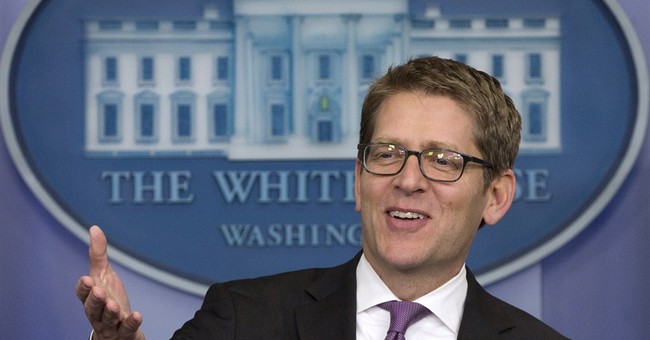 “I’ve been at the White House since the beginning and heard people say meaningful healthcare reform can’t be done,” White House Press Secretary Jay Carney proudly announced at his daily press briefing today. After all the setbacks and negative attack ads, he said, the administration had successfully met their Obamacare sign-up goal.

“With the remarkable surge in enrollment,” he said, “7,041,000 people [enrolled] before the midnight deadline.”

“When we get numbers in from the rest of the states, even more people will be covered,” he added.

Reading from prepared remarks, Jay Carney also took a shot at Congressional Republicans, blasting them for their repeated and failed attempts to repeal and defund Obamacare.

He also expressly said that many of the people who enrolled in the exchanges before the March 31 deadline were young adults, thus staving off fears that the law wouldn’t be self-sustaining. However, the demographic data of who actually enrolled isn’t yet available.

“There was a surge in enrollment among young adults,” Carney intoned. “But we already know that [the] breakdown is sufficient that the marketplaces will function.”

“We surpassed everyone’s expectations,” he said.