Rep. Jordan Tells Rosenstein He Has a Week to 'Get His Act Together' 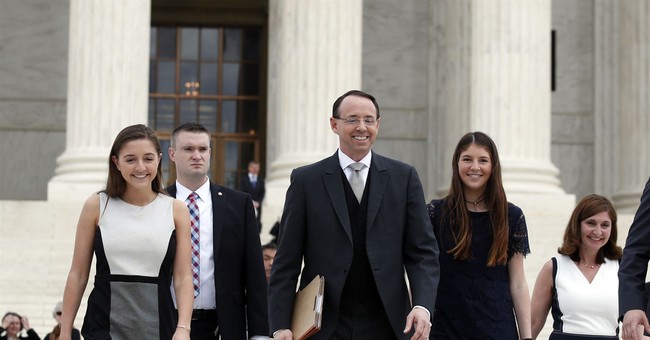 Deputy Attorney General Rod Rosenstein and FBI Director Christopher Wray are on Capitol Hill Thursday morning to testify about the FBI's conduct during the 2016 presidential election. The House Judiciary Committee members had plenty to ask the two men about the recent IG report that exposed the anti-Trump bias of some FBI agents. One of those agents, Peter Strzok, met with committee members behind closed doors this week.

The committee is also fed up with the apparent resistance from the DOJ and FBI for documents related to the agencies' conduct, specifically whether informants spied on the Trump campaign.

“You have unilaterally restricted access to these materials to the ‘Gang Of Eight,'” House Intelligence Committee Chairman Devin Nunes (R-CA) wrote in a letter to Rosenstein. “As the committee has repeatedly stated, this is unacceptable.”

Rosenstein welcomed congressional oversight, saying at Thursday's hearing that it is "vital to democracy." He defended the agency, however, explaining that they are dealing with an extraordinary number of document requests.

The agency "deviated" from their principles, Rosenstein admitted after remarking on the IG report. Agents not only exhibited political bias, but they leaked sensitive intel to the news media.

"We need to deter future violations" and hold agents "accountable," he pledged.

Wray shared what the FBI is doing to meet those goals.

For months, he said, they've been working to make witnesses available and to produce over 880,000 pages of documents. They have "substantially complied with a majority of subpoenas" and have even increased staffing to meet the congressional requests. One hundred employees are "working day and night through the weekend" to collect, review, process and provide thousands of additional pages to Congress, he added.

First, they will be holding employees accountable for misconduct. Second, they'll hold training sessions so everyone understands the lessons learned in the IG report, starting with the executives. Third, they'll make sure the policies and training will help employees remember what is expected. They will be "drilling home the importance of objectivity." Additional action items are assuring that recusals are handled correctly and employees follow a new media policy that is much clearer. Furthermore, the FBI's No. 3 official will review how they staff and supervise sensitive investigations.

With these changes, the FBI is "determined to emerge better and wiser."

While the IG report makes clear "they have important work to do," Wray pointed out that it only centered on a small number of employees connected with particular events in 2016.

"Nothing" in the report, he insisted, "impugns the integrity of the FBI as a whole."

Still, other committee members were impatient for Wray and Rosenstein to hurry up and provide whatever evidence they may have that can once and for all conclude the investigation.

"Whatever you got, finish it the hell up, because this country is being torn apart," he added.

Rep. Jim Jordan (R-OH) grilled Rosenstein about keeping information from Congress and for directing Strzok to keep quiet during their meetings.

"We have caught you hiding information," Jordan alleged.

Rosenstein said he "disagreed" with the congressman and suggested that he "not rely on what the press said."

"You have seven days to get your act together," Jordan said.