Trump Goes After His DOJ in Lengthy 'Fox & Friends' Call 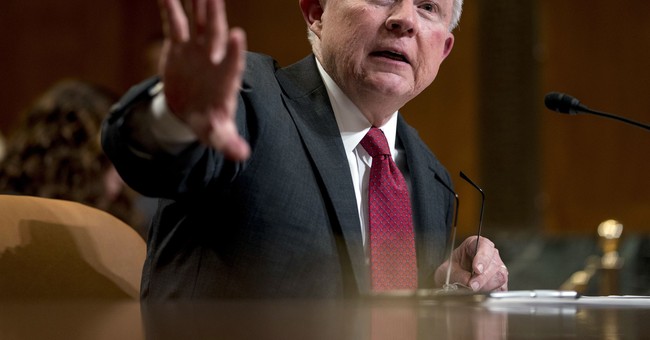 "I'm disappointed" in my Department of Justice, President Trump said in a lengthy phone call with "Fox & Friends" Thursday.

There are people "who shouldn’t be there.” He has stayed out of DOJ's affairs until this point, but hinted at eventual intervention.

"But Mr. President, this is your Justice Department," morning anchor Steve Doocy noted.

Trump admitted as much, but is still fuming over the Russian collusion "witch hunt."

The president called in to Fox to sound off on former FBI Director James Comey's town hall on CNN Wednesday night, which Trump admitted he watched.

He had little good to say about "leakin,' lyin' Comey," convinced that his former FBI director broke the law when he leaked his classified memos. Comey disagrees, accusing Trump of "just making stuff up."

"The details matter because the facts matter, and should matter even to the President," Comey explained, adding that he had chosen to classify some memos but not all of them. "Some of those memos I decided should be classified. Four others, I wrote them and was highly confident they should not be classified. Those four I kept a copy at the FBI and a copy at my personal safe at home." (CNN)

When he was done pushing back at Comey's "nonsense," Trump again criticized the special counsel investigation into Russian collusion.

.@POTUS on @foxandfriends: “There’s no collusion with me and the Russians. Nobody’s been tougher to Russia than I am.” https://t.co/2gGJB2FofM pic.twitter.com/89qLDqmymY

"Nobody’s been tougher to Russia than I am,” Trump said. "Ask Putin."

He mentioned the sanctions he's placed on aluminum by way of example.

It's why, despite the "phony cloud" of collusion over his head, he gives himself an "A plus" for his first year in office.

After the nearly half hour interview, "Fox & Friends" anchor Brian Kilmeade offered the understatement of the century: "He's a morning person."