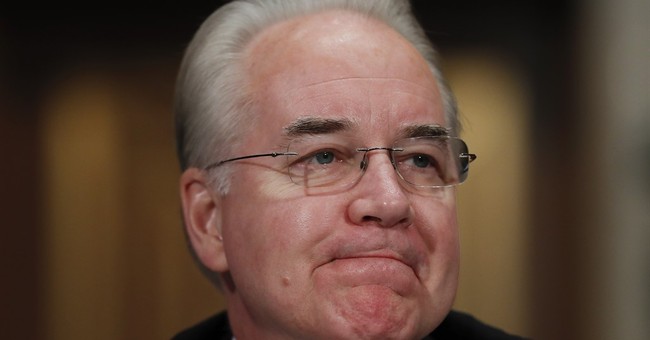 HHS nominee Rep. Tom Price (R-GA) had the task of explaining his plans for repealing and replacing Obamacare at his confirmation hearing on Wednesday. But, he had the additional task of defending his personal character.

Since President-elect Donald Trump announced Price as his pick for HHS secretary, critics have dug up his record to prove he's too extreme for a presidential administration. Some media outlets even predicted he will be a nightmare for women thanks in part to his views on birth control. These attacks culminated on Capitol Hill as liberal senators used the hearing to try to paint Price as a compassionless, greedy politician.

Sen. Al Franken (D-MN) opened his remarks by noting he was happy to meet Price this week before the hearing, but proceeded to suggest he had benefitted heavily from tobacco companies. After the character assault, Franken said he has a lot of questions about Price's plans to repeal the Affordable Care Act.

"I’m very frightened over what you are going to do," Franken said.

Price responded to Franken's accusations noting this type of rhetoric is why it's difficult to reach solutions on Capitol Hill. He said the conclusions over his policies are "absolutely incorrect." He insisted he cares about quality health care for all Americans and "hopes" they can work together to solve these challenges.

Price also responded to the report that suggested he engaged in insider trading. On Tuesday, CNN reported that Price may have introduced legislation that benefitted a company in which he had just bought stock.

“I was not given stock tips,” he told Sen. Patty Murray after she interrogated him on the matter.

When Warren raised the same issue, Price became a little more annoyed and said he was "offended by the accusation."

Sen. Johnny Isakson (R-GA) also had the chance to refute attacks on Price's character when he introduced his friend.

When Price had the chance to actually discuss his plans for health care, he explained that he has put forward numerous bills to replace Obamacare, but knows it's important Americans currently on an Obamacare plan get to keep their insurance. His number one priority is putting patients first.

"It became crystal clear that our health care system was losing focus on the number one priority – the individual patient," he said.