Bombshell: So Far, Only Three People Have Been Fired After VA Scandal 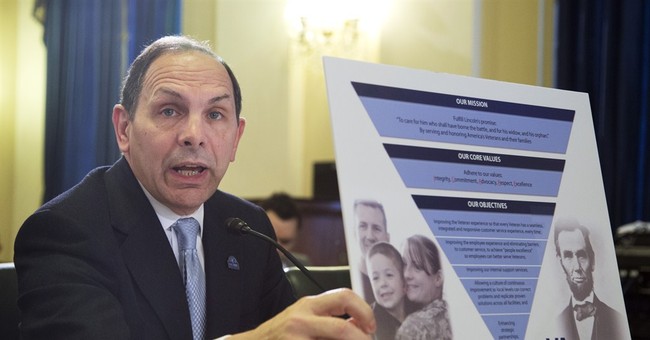 The scandal at the Office of Veterans Affairs last year proved that our veterans were being shamelessly ill-treated. Among other atrocities, our former soldiers were forced to wait months to be seen by doctors and, once they were finally admitted, were often treated in unsanitary and dangerous conditions. Politicians demanded change and accountability. VA Secretary Eric Shinseki resigned. Yet, months later, new internal documents prove that the mess is hardly cleaned up at all.

The documents given this month to the House Committee on Veterans Affairs, which provided them to The New York Times, show that the department punished a total of eight of its 280,000 employees for involvement in the scandal. One was fired, one retired in lieu of termination, one’s termination is pending, and five were reprimanded or suspended for up to two months.

That means only three people have actually been fired from their positions. Three.

Oh, and the only person actually fired, Sharon Helman, the director of the Phoenix VA hospital was not fired because of her role in the scandal, but because she had accepted “inappropriate gifts,” according to the New York Times.

The Phoenix VA hospital was especially toxic. It’s reported that dozens of patients may have died awaiting care.

“It is outrageous that the Obama administration has not held people accountable for manipulating wait times in VA hospitals after promising to take action against those implicated in the scandal,” said Perry.

Our vets gave their all for us, they deserve to be first in line for the best health care we have to offer. Former Governor Sarah Palin gave an important speech about our vulnerable veterans and their needs at this year’s CPAC. She felt the need to speak for them, because our humble vets are unlikely to ask for anything themselves.

"The reason you don't hear about these scandals, is because our vets don't complain."

Our veterans are too important to be sidelined. It’s time to remove anyone from the VA who believes or acts otherwise.