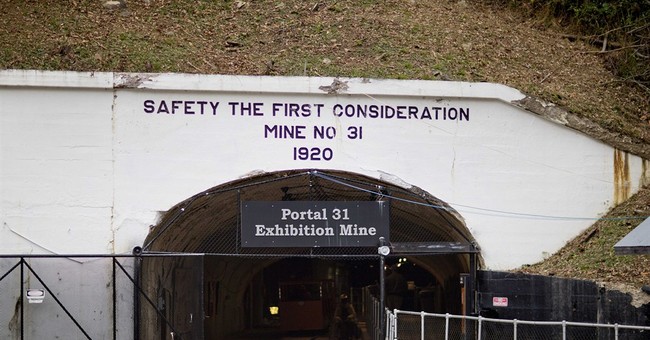 Coal is pretty important to West Virginia. Coal-fired electric power plants accounted for 95 percent of West Virginia's net electricity generation in 2013 and the state produces about 15 percent of all fossil fuel energy in the US. What’s more, the Mountain State leads the nation in underground coal mine production. One government agency seems poised to slow these miners down, but not if Rep. Alex Mooney (R-WV) can help it.

“West Virginia is blessed to be abundant in natural resources," Mooney said. "Unfortunately, the President is intent on destroying coal as a domestic energy source.”

Rep. Mooney introduced the Supporting Transparent Regulatory and Environmental Actions in Mining (STREAM) Act on Thursday in an attempt to protect a coal industry that is under threat from overbearing environmental regulations demanded by the Interior Office of Surface Mining Reclamation and Enforcement (OSM).

A fact sheet provided by Rep. Mooney’s congressional office offered some context for his proposed legislation.

In April of this year the administration is expected to issue Stream Buffer Regulations aimed directly at shutting down surface coal mining operations. The proposed regulations would essentially ban mining operations within 100 feet of anything the Department of the Interior Office of Surface Mining Reclamation and Enforcement (OSM) defines as a “stream.” Even worse, the proposed new regulations are expected to prohibit mining underneath a stream, making underground coal mining very challenging.

These unnecessary burdens on coal production encouraged Mooney to introduce the STREAM Act, which will do three key things:

1. It will require OSM to use existing funds in their budget to conduct a study of industry impact from them and then the bill specifies that once they’re done with that study, they have to wait a year to actually implement the rule.

2. It will prevent OSM from enforcing regulations that are duplicative from other agencies. Specifically, it can’t enforce anything that’s already being regulated to through the Clean Water Act by the EPA.

3. It will require OSM to publicly release all the data they used with their final version of the rule.

OSM’s latest regulation appears designed to end surface mining. Its anti-coal agenda is just another indicator that the Obama administration is trying to close down the industry for good.

The STREAM act marks the second battle in Mooney’s war against these debilitating environmental regulations. He first charge was successfully getting a provision included in the House budget to defund implementation of the stream buffer zone rules. Mooney is particularly adamant about this bill, for he recognizes the significant blow the OSM rule could have on West Virginia's economy.

“According to industry estimates, the expected rule from OSM would shutter tens of thousands of jobs in West Virginia and hundreds of thousands nationwide," Mooney explained. "The impact of such a serious hit to the coal industry would have the secondary effect of increasing home-energy prices for families and businesses. This bill protects the ability of Americans to seek prosperity from our nation’s natural bounty and is good policy for hardworking families.”

Now that the STREAM Act has been introduced in the House, over the next few weeks it will be debated in subcommittee. It will then move to a full committee vote, where Rep. Mooney’s office expects it to be voted on on the floor. They expect it to be at least a 2-month process.

It’s perhaps superfluous to say that it is unacceptable for a government agency to so closely regulate coal production and regulate anywhere running water can be found.