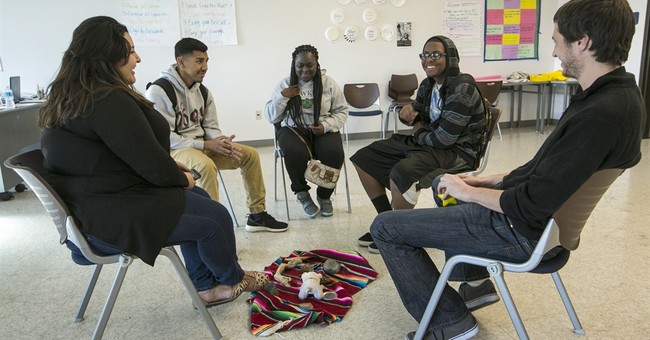 Rep. Luke Messer (R-IN), a member of the House Education and the Workforce Committee, gets why conservatives want to abolish the Department of Education. This distant, bureaucratic department bypasses parents and students by more or less determining which schools they should attend. It is indeed an unpopular agency among freedom-loving Americans. Yet, Messer warns that abolishing it would only make conservatives seem insensitive to parents who want the best for their children. So, he has a better idea:

School choice, as Messer described it at the Heritage Foundation's Conservative Policy Summit in Washington, DC on Tuesday morning, is an "open school system where parents are put back in charge." It's no wonder Heritage had Messer promote the education plan, for it fit perfectly into the summit's theme this year: "Opportunity for All, Favoritism for None." The program would push federal funds to states to follow students directly through school. In addition to establishing and chairing the first ever Congressional School Choice Caucus, Messer has introduced a piece of legislation called Enhancing Educational Opportunities for All Students Act. He outlined the law's four provisions:

1. It's an opt in program, giviving every state the option to convert nearly $14.5 bilion in education funds into scholarships to follow students to their public or private school of choice.

2. Makes 529 savings accounts more flexible for parents, to use for Pre-K to high school and college expenses.

3. Gives parents the opportunity to use Coverdell savings account for homeschool expenses, etc.

4. Eliminates contribution limits on these accounts.

Messer's passion for school choice stems from a few personal experiences. Growing up in Indiana, he did not have the opportunity to enroll in private schools. But, instead of hurting his education, it actually aided it:

"I was blessed with great teachers and an active parent. Too many kids don't have that. They're locked in failing schools and losing faith in America."

Messer continues to witness the benefits of school choice today, even here in Washington, DC. The congressman shared how he recently visited BASIS charter school, an institution that teaches a liberal arts curriculum and accepts students from every zip code in the DC area. Messer was wholly impressed with the students' hard work and noted that their results were 'off the charts.' What's more, the opportunity wasn't lost on them.

"The freedom to choose their learning environment has changed the trajectory of their life."

Messer isn't the only lawmaker promoting school choice in Congress. His fellow congressmen are putting forward their own legislation. Sen. Lamar Alexander's (R-TN) Scholarship for Kids Act, for instance, offers states the freedom to use $24 billion in education funds into scholarships that directly follow the student. As for Sen. Tim Scott (R-SC), he has introduced Creating Hope and Opportunity for Individuals and Communities through Education (CHOICE) Act, which would expand educational opportunities for children with disabilities, children living on military bases, and lower income families.

Parents can be rest assured they have these school choice champions now controlling Congress. If it wasn't clear to the audience why Messer was pursuing school choice so ardently, he certainly drove it home in his final remarks:

"This is the civil rights issue of our time. Let's be the movement that fights for the American family and make sure that every American has a real chance to succeed."