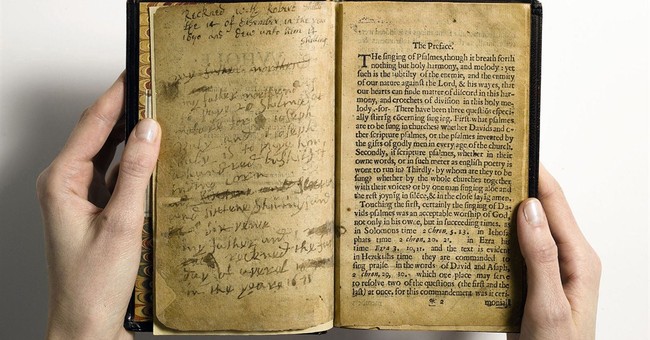 You know the pilgrims traveled to the New World on the Mayflower, but did you know about the Steadwell? You know they ate turkey during their first feast, but did you know they also had baked beaver? These are just a couple of the little-known facts author Rod Gragg includes in his book, “The Pilgrim Chronicles,” an eyewitness account of the pilgrims’ journey to America and the first Thanksgiving, as well as what their lives looked like in England before stepping onto that famous boat. Gragg shared some insight with Townhall on the effort that went into compiling this information, as well as his passion for studying the pilgrims. Check out what else he had to say, then buy the book! You might just learn something new on this Thanksgiving about a few of America’s first settlers.

What made you want to write about the pilgrims? Is this something you’ve always been interested in?

“I’ve always found the pilgrims to be a fascinating group of people and I know that their influence on the development of our nation was tremendous. So, they’ve always had an appeal to me. But actually I had written a couple of books in this genre of eyewitness history. You write a narrative and it’s highlighted with the primary source materials, documents, letters, diary entries and so on that make up history to go and find. So I had done a couple of books like that and the publisher came to me and asked if I wanted to do something like that on the pilgrims and that was something I was interested in because I was familiar with it a bit. But my concern was there wasn’t enough primary source material to actually build an eyewitness history of the pilgrim experience. As it turned out, it was far more than I expected and as usual I only thought I knew the pilgrims – I knew far less about them then I thought I did and they really are extraordinary people who have tremendous impact on American history.”

Can you give us a small teaser, maybe share one of the little-known facts that you included in your book?

“The pilgrims traveled to America from the North Atlantic on the Mayflower, but there are actually two pilgrim vessels, two ships. The other one was called the Steadwell and it did not live up to its name. It sprung leaks repeatedly. When the pilgrims left with two ships from England and they went out into the English Channel and then into the open Atlantic, they made two attempts to travel with both ships. But, the Steadwell continued to leak, they brought it back into port and tried to do repairs and it just didn’t work. Finally, they brought it back to Plymouth and decided it was not seaworthy and so they moved everybody that they could onto the Mayflower. Some of them chose not to come. That’s why the Mayflower, which really was a pretty good size ship, was so packed across the Atlantic.”

Can you put into words what kind of faith and courage it took for the pilgrims to leave the Old World and sail toward the unknown?

“Well this book spends about half of its space dealing with the pilgrims in England. That’s the side of the story that most Americans don’t know. It’s really an extraordinary story, very remarkable. The pilgrims were a remarkable people who were extremely courageous and to do what they did took extraordinary heroism. And of course they made a major positive impact on America.”

Another interesting part of the book was when you talk about the first Thanksgiving feast – which didn’t really look like your typical Turkey Day dinner. Could you tell us what was on the pilgrims’ Thanksgiving table?

“Well the pilgrims were not the first to observe Thanksgiving in the New World. The Spanish settlers in New Spain did so, and so did the Jamestown colonists. But, it was from the pilgrims that we get our Thanksgiving tradition. Although, their Thanksgiving feast was probably not what we think it was. In some ways, it was very different from what we expect today. It was a 3-day event. It presumably featured a very joyful worship service, but what is also on record is that it also included recreations. Those were probably the field sports that were so popular to the English people of their day and that would have included wrestling, foot races, jumping contests - these are the kinds of activities that the English people loved at that time. We do know it also included what they describe as either a firearms competition, a shooting match, or some type of firearms demonstration. One of the sources says they exercised their arms and whether they were having a shooting match or whether they were having a firearms demonstration maybe for their invited guests, the Poconos Indians, we don’t know. But those are things we don’t normally associate with the pilgrims’ Thanksgiving.

As far as what was on the menu, we know that they were on record as saying they served waterfowl, presumably duck or goose and we know that they served wild turkey, which is where we get our tradition, I guess. But they also had venison. The Poconos Indians, their guests brought three deer, which they butchered, and dressed and served. But they also probably had baked beaver. Yes, they were serving the items that they ate later at Plymouth colony and they would have had lobster, baked clams. We know they served fish, cod, bass. And they had Indian corn, they had peas from England, and also probably beans, cabbage, parsnips, onions, biscuits, probably English porridge or oatmeal and probably corn-based pasty pudding.”

Any thought on why it was the turkey that caught on and not the beaver?

“I don’t know why the turkey became the great tradition of Thanksgiving, but probably because it’s a lot easier today to have a turkey dinner then to have goose, duck, certainly baked beaver if they had – or baked venison which we know to have.”

There’s a lot of great imagery in the book. Did you have a say in what graphics were going to be included in the book?

“Yes, as a matter of fact this publisher is very strong on graphics and they designed two of the maps that are there. There’s one map that’s a traditional, historical map from an earlier era. As far as the images, this really is an illustrated book and I really tried to find as many authentic images as I could. Some are from that era but there aren’t many from that time period. Many of them came from the 19th century and the early 20th century and are authentic depictions of various events.

The star of the show, so to speak, of this book, are the eyewitness accounts. They began with an eyewitness account of the people who became the driving force of the pilgrims, the separatists, an account of their standing by the East Coast of England trying to board a ship to Holland to escape persecution and are caught by English soldiers who bear down on them. There’s also I think a very moving account by a young Puritan preacher who’s in the pilgrim tradition, a man named John Henry, who was executed for writing an unpublished theological manuscript. This letter is to his wife and daughters before he was executed, it’s a very touching letter to me. There’s also a behind-the-scenes account of some of the scandalous behavior that occurred at the court of King James I. There’s a description of the separatist worship service that was recorded secretly by a government agent who was sent to infiltrate the people who became the pilgrims and there’s descriptions of the voyage across the Atlantic. There’s a cargo manifest from a similar expedition. It’s probably typical of what the pilgrims carried and then there are period accounts of the pilgrims and when they reached America and New England and what they experienced there. Some of the most interesting eyewitness accounts are those earlier explorers from North America who recorded what they thought they saw and these were accounts the pilgrims probably read as they prepared to make their voyage to the New World. They would read that these folks saw and claimed that in America they would encounter everything from 3-headed snakes to unicorns to giant clams, all kinds of fanciful descriptions that the pilgrims probably wondered what are we going to see when we’re in this wilderness, this new home of ours?”

Some have criticized today’s classrooms for their curriculum as not accurately portraying the pilgrims’ experience and really highlighting their mistreatment of Native Americans. Do you agree that they’re not being taught as they should? What are a few of the worst misconceptions about the pilgrims?

“Well I would say that the history of the relationship between European Americans and later American authorities with the Native American peoples is certainly one of the saddest chapters of American history. But the pilgrims actually set a model of a much better relationship. They really developed a healthy, respectful relationship with the Poconos Indians and with some of the other tribes in the area. They were kind of a model of what those relationships should have been and could have been perhaps with European Americans and later American authorities so it’s really, I think, inaccurate and a lie that the pilgrims would be blamed for some of the terrible relationships that actually did exist later on. I think that, as far as the treatment of the pilgrims today that I hear in some cases, I think that probably reflects the bias of a contemporary American culture toward anything related to faith more than it reflects true accurate history. The pilgrims were a remarkable people who really are deserving of respect. They really probably deserved the tradition that has come down to us about them that is not totally inaccurate. These people came to a New World to try to establish a new home where they would exercise freedom of faith. They tried to establish a respectful relationship with the Native Americans, they were respectful of their environment. They did set up a remarkable legacy for us of how they influenced American culture, law and government based on the two pillars that were the pillars of colonial America and that freedom.”

Black Friday is quickly becoming Black Thursday, meaning families are going shopping as soon as they’re done eating turkey. Do you think our culture is in a sense forgetting the true meaning of Thanksgiving?

“I think Thanksgiving is really a great, really unique American holiday and it’s a time, if you follow that tradition that has come from the pilgrims, a time for us to really stop, step back and take account of the blessings we have in this country and to have an attitude of gratitude that God has blessed us. There is a reason why the national motto of the United States is ‘In God We Trust’ and it goes back to the States exhibited by people like these pilgrims and in other colonies in the very beginning, that you see reflected even in the language of the Declaration of Independence, this foundational Judeo-Christian worldview that American culture, law and government were founded on and this is a good time to think about that and to remember that despite all of our faults that we have all throughout our history, this is an exceptional nation and it has produced exceptional opportunity of freedom for generations of people throughout the world.”