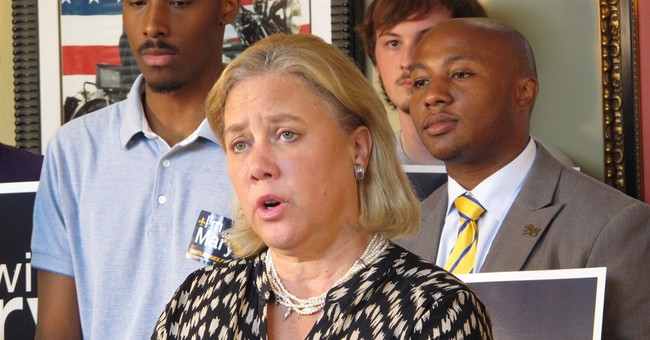 She votes with President Obama 97 percent of the time. Yet, Sen. Mary Landrieu (D-LA) represents the "middle ground" in Congress, according to The Times-Picayune, a New Orleans-based newspaper.

In its gushing editorial, The Times-Picayune praises Sen. Landrieu's efforts in steering disaster relief to the state after Hurricanes Katrina and Rita rattled its borders, as well as helping to secure the necessary funds to restore Louisiana's coasts following the disastrous BP gulf oil spill in 2010. Her success in these areas is certainly commendable, but the newspaper takes its praise a bit too far when it claims Landrieu is working directly in the political center:

She occupies the middle ground in Congress. She has been an advocate for free trade and a strong military. She pushed the Obama administration to lift its drilling moratorium after the BP spill and is an advocate for the oil and gas industry, which is a mainstay of Louisiana's economy.

Right...Did I mention Landrieu votes with the president 97 percent of the time? This is a fact The Times-Picayune has even reported. Oblivious. In addition to her nearly perfect party line voting record, Landrieu has proven to be radical on issues such as abortion. The Democratic senator has supported taxpayer funding for the procedure and has refused to support restrictions on abortion after five months, when unborn babies can feel pain.

What's more, Landrieu is a proud supporter of Common Core, an educational initiative the federal government has forced on schools across the country, taking decisions out of the hands of teachers and parents.

Landrieu is nowhere near the middle. She's in left field, catching everything our liberal president throws her way.