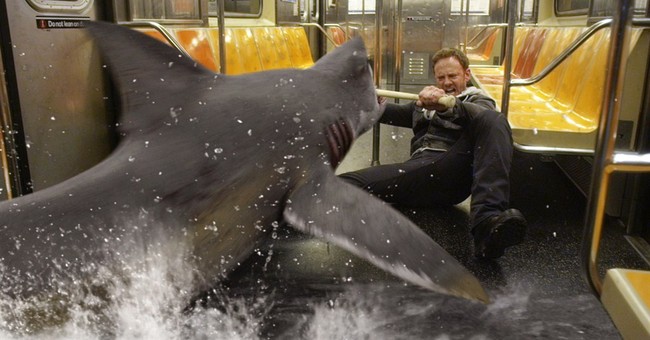 I never thought I’d praise the filmmakers who brought us ‘Sharknado.’ But, according to the Twitterverse, ‘Sharknado 2: The Second One,’ which premiered Wednesday night on Syfy, took a much-needed jab at New York City’s anti-gun agenda.

To protect themselves from the sharks falling from the sky, the film's protagonists needed weapons. But, a character begrudgingly informed them, there were no gun shops in the city.

Try, if you can, to disregard the ridiculous plot and focus on the point: A machine gun would stop these sharks in their tracks a whole lot quicker than a chainsaw or a baseball bat.

Former New York City Mayor Michael Bloomberg and Governor Andrew Cuomo have been obsessed with wiping out firearms from both Manhattan and the state as a whole. Bloomberg spent millions to create an anti-NRA organization called EveryTown and Cuomo’s poorly named “SAFE Act” has prompted gun companies to flee the state and has essentially turned gun owners into criminals. What they ignore, however, is how guns have often proven to be life saving tools in desperate situations.

Katie recently wrote about Everytown’s new anti-gun ad which showed a woman being attacked by her ex-husband who was trying to take their child. Although the advertisement was trying to prove that we need to enforce more gun control, Katie pointed out that it inadvertently demonstrated how the victimized female could have actually protected herself if she had access to a gun in the home.

It’s not just these fictional characters upset with the Empire State's anti-gun policies. Actual New Yorkers have taken to the streets to give these politicians a piece of their mind. Their message? “Hands off our guns”.

Good to see Hollywood joining these freedom-loving New Yorkers and not being afraid to slam policies that aren’t working.