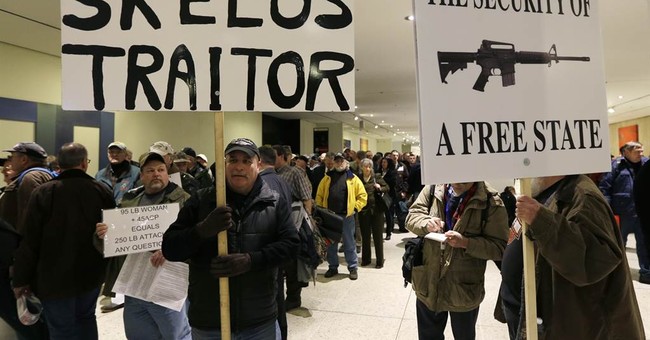 It's perhaps no surprise gun rights activists stormed the state capital in protest, after the SAFE Act has resulted in an astounding 1,200 felony charges. A few familiar faces were in attendance, including real estate mogul Donald Trump, who recently announced he will not be entering the state gubernatorial race. Trump spoke with John Zack and Susan Rose of WBEN radio this morning ahead of his appearance. While on air, he insisted gun rights is still a crucial issue for Republicans in the Empire State:

“I’m a big Second Amendment person […] Their voice is not being heard with what they’re doing with guns and the UnSAFE Act I call it.”

Someone who did throw his hat in the ring for governor, Republican Rob Astorino, also attended the rally, declaring he would work to abolish the law if elected.

Not every Second Amendment-loving New Yorker joined Trump and Astorino at today’s rally, however. The president of the NYS Rifle & Pistol Association, Tom King, sent a letter to about 1,000 activists before today’s rally, explaining why his group will be skipping the event. Among other reasons, King explained that he doesn’t want the Second Amendment message to become compromised in the midst of Frackers, Right to Lifers and Land Owner Rights Groups who will be in attendance at the event. You can read his whole letter

King may be on to something. In a poll on WBEN.com, 60 percent of respondents say the rally “will not accomplish anything.” What do you think? Is it just a waste of time?

The SAFE Act rally comes a day after dozens of protestors showed up outside a Grand Island town hall in upstate New York to condemn Grand Island High School’s decision to suspend a student for wearing a t-shirt with the NRA logo. Rus Thompson, who helped organize the event, insisted the school apologize and return what rightly belongs to the student:

Thompson says the principal of Grand Island High School, where Kinney attends, has been pro second amendment, and says the vice-principal had unilaterally made the decision to suspend Kinney. "We want an apology, we need to have his pocket tool returned which was confiscated everyday," says Thompson.

Their demands are not going unnoticed. The Superintendent Teresa Lawrence recently issued a statement declaring she is “personally reading all the emails and listening to all messages” regarding the incident and is conducting a review of the school’s policies to ensure students’ Freedom of Speech is being honored.

As of late, New York has proven to be one of the least welcoming places in the country for gun owners. At least today shows there are still freedom-loving Americans in the Empire State willing to defend their right to bear arms.