Another Actress Offends the Media With Anti-Feminist Comments 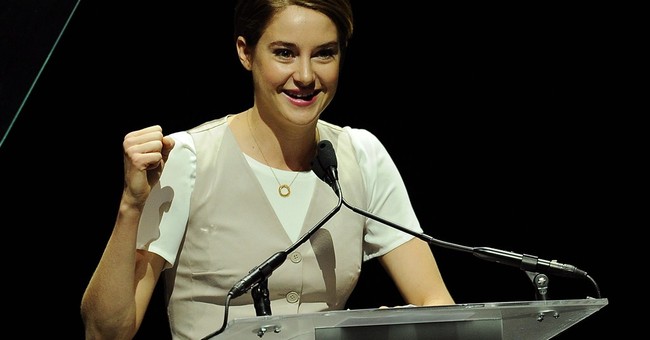 It turns out Jezebel’s hatred for Kirsten Dunst was short-lived, as they've found a new female celebrity to skewer. Dunst ruffled feminists’ feathers in April by promoting traditional gender roles. Now, it's 'Divergent' film star Shailene Woodley who is rejecting modern feminism. Here's an excerpt from her interview with Time, when they asked her if she considered herself a feminist:

No because I love men, and I think the idea of ‘raise women to power, take the men away from the power’ is never going to work out because you need balance. With myself, I’m very in touch with my masculine side. And I’m 50 percent feminine and 50 percent masculine, same as I think a lot of us are. And I think that is important to note. And also I think that if men went down and women rose to power, that wouldn’t work either. We have to have a fine balance.

Jezebel, true to form, quickly jumped on Woodley's comments, accusing her of being "young and a bit sheltered" and reasoned that if only someone sat her down and "explained that feminism is actually about equality and women's empowerment, she'd get the message."

Tell me again how constantly criticizing candid female celebrities the moment they even hint they don't want to be called a feminist is empowering to women? To prove how much they believe in female unity, Jezebel even put together a hit list, if you will, of female celebrities who have refused to embrace the title of "feminist."

Jezebel or The Daily Beast may ignore it, but there is truth to what these celebrities are saying. Modern feminism, by continually defining the opposite sex as dominating or misogynistic, has worked to diminish some men's confidence. What's more, some feminists' 'women don't need men' diatribe, suggested by well-known figures such as Gloria Steinem, who is often attributed with the infamous "fish without a bicycle" quote, has had a negative impact on society at large. Consider the fact that 85 percent of children with behavioral disorders come from father-absent homes.

These are statistics today's feminists want nothing to do with. Thankfully, more and more Hollywood starlets are standing up for the men in their lives by rejecting this sexist movement.