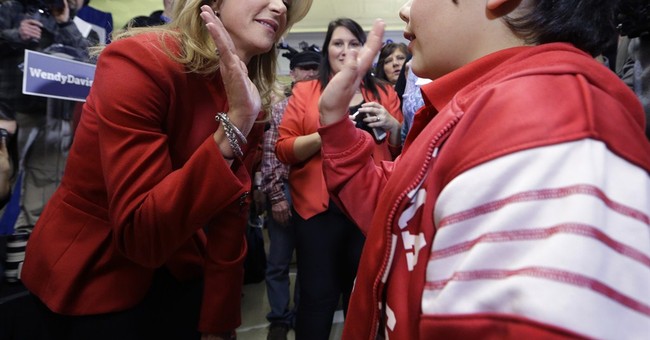 Most people familiar with Texas State Senator Wendy Davis are also familiar with her 11-hour filibuster this past June in which she defended late-term abortion. But, what many people don’t know, is that wasn’t her first filibuster. Back in 2011, Davis took to the floor of the Texas Legislature to try and prevent public schools from losing billions of dollars. One would think that, after speaking for hours on the subject, Davis would be an expert on improving education. Like her stance on abortion, however, her education platform puts her on the wrong side of history.

Davis ‘s education filibuster successfully raised her profile, yet also managed to delay SB 1811, which contained a funding plan for the public school system. Because of the stalling, Gov. Rick Perry indirectly called her a “show horse.” Davis’s misguided education efforts didn’t stop there. Today, she is pursuing a plan that would reflect the oppressive federal mandates apparent in other states. Breitbart Texas reported on the specifics:

Davis sputtered promises of being pro-collaborative partners, pro-dual college credits, pro-charters but anti-vouchers. Pro-less testing, pro-government technology initiatives, pro-merit pay and is all for forgiving college loan debt to those in the top 20 percent of students in their class who go onto college to become teachers.

She didn’t quite elaborate on how her plan would also come at taxpayers’ expense. Texans for Greg Abbott exposed her burdensome policy in an ad called, “Spending, Not Solutions.” Although Davis hasn’t said how much her proposal would cost, she did admit “it’s not cheap.”

Once again, it’s her opponent who gets it right. Attorney General and GOP gubernatorial candidate Greg Abbott is introducing education policies that would benefit, not burden, his fellow Texans. For example, he is intent on improving pre-Kindergarten before expanding it to a full day. Here’s how he justified his common sense approach:

"Without a firm foundation, cracks often appear in later years. The foundation of education is grades K-3. If we want more children graduating from high school - if we want to elevate our students’ success--we must ensure our students start with a solid foundation in K-3. The cement that solidifies that educational foundation is reading and math."

In addition to raising the standards of early education, Abbott wants to give schools the flexibility to achieve those standards:

"We will no longer patch the cracks in our education system every few years. Instead, we will achieve lasting results by giving our schools and families the tools they need to create a solid foundation for learning in Pre-K 4 through grade three and then building on that foundation, all the way through graduation from high school. We will cultivate a culture of aspiration and achievement. That means setting expectations of excellence for our children, our teachers, our principals and our parents, and then giving educators the flexibility to achieve them.”

So, do Texans choose a plan that would cost them a not-so-pretty penny and make them dependent on federal mandates, or another that would give them the opportunity to pave their own path to educational success?

Davis keeps giving Texans reasons to vote for her opponent.