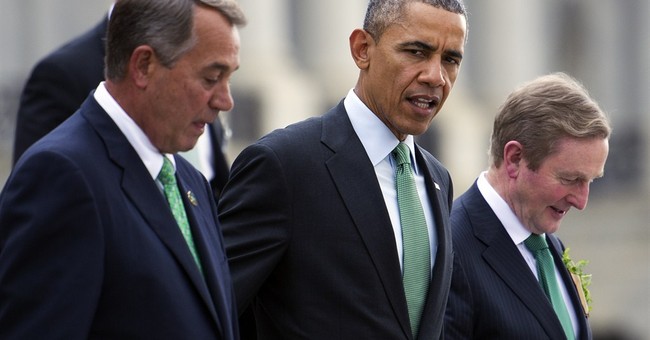 White House Press Secretary Josh Earnest called on Speaker John Boehner (R-OH) Friday, to work with Democrats, and not his fellow Republicans, in order to find a way to increase defense spending.

"The most effective template that we've seen in recent history has been Republican leaders in the House sitting down with leading Democrats to find a compromise," Earnest said. "That is what Sen. [Patty] Murray (D-WA) and Chairman [Paul] Ryan (R-WI) did and I think that there is some template like that, it doesn't necessarily have to be just those to people, but this could serve as a model for resolving these kinds of situations moving forward."

Republican defense hawks have long sought to undo the automatic defense spending cuts first passed as part of the 2011 Budget Control Act. Democrats, and a fair number of Republicans, have also sought to undo the BCA's cuts to selected domestic programs as well. Together, the sequestration cuts agreed to in the Budget Control Act would have reduce deficits by $1.2 trillion over ten years.

But in 2013, Ryan and Murray cut a deal that lifted $63 billion in scheduled spending cuts over two years, split evenly between defense and domestic spending. Now many in both parties want to undo those spending cuts again going forward.

“We have to change the law,” House Homeland Security Committee Chairman Michael McCaul (R-TX) told The New York Times Thursday said. “Providing for the common defense should apply to all national security agencies.”

Other Republicans were just as eager to increase domestic spending as well.

"At the end of the process, it will be difficult to increase military spending without providing some assistance to non-defense,” House Appropriations Committee member Charlie Dent (R-PA) told the NYT.

But not everyone was willing to cave in to higher spending yet. "It would be a mistake to blow the caps and just go back to the big spending that preceded that," Sen John Cornyn (R-TX) said.

The House Budget Committee passed a resolution that fully funded defense at pre-sequestration levels Friday. It is unclear if they votes to pass the full House next week. If they don't, Democrats will be more than willing to step forward and trade their votes for higher domestic spending levels.