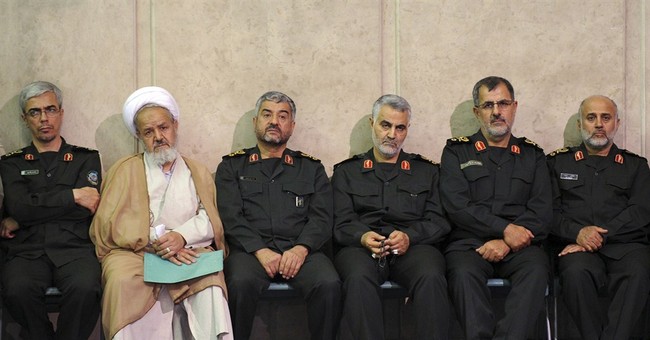 Part of the reason President Obama is so eager to give Iran a nuclear weapons deal is that he wants the regime in Tehran to become "a very successful regional power."

So it should come as no surprise then, that not only is the White House well aware that Iran is participating in the current battle for Tikrit, but that Iran is actually leading the battle. Newsweek reports:

A notorious Iranian commander is spearheading the Iraqi offensive on the ISIS-held city of Tikrit, providing tactical expertise and a key link to Tehran for supplies to the Iraqi militias advancing on the terror group’s territory.
...
Major General Qasem Soleimani, the shadowy former leader of the elite Quds Force, the special operations arm of the Iranian Revolutionary Guard Corps (IGRC), is directly overseeing the eastern offensive on Tikrit. The Iranian general has been pictured on the outskirts of the city in photos shared widely on social media.

Asked about Tikrit Wednesday, White House Press Secretary Josh Earnest had nothing but praise for the operation and Iran's involvement in it:

This is an operation that the United States has been aware of for some time. The United States was aware of the planning for this operation and was obviously aware when it was begun. ... The good news is that this operation includes a multisectarian force. ... So that is why we are gratified that there aren’t just Iraqi security forces involved, but there are also fighters associated with local Sunni tribes who are engaged in this effort. ... The other thing that we’re mindful of is that Iranian forces are also involved. And we have said from the beginning that the United States will not coordinate militarily with the Iranians, but the fact that some Iranian military personnel are involved doesn’t change the priority that the Iraqis can and should place on this operation to ensure that it’s inclusive and multi sectarian.

(emphasis added) Earnest did stress that "this is an operation that is led by Iraqi security forces," but is that really true? Where do the Iranian forces end and the Iraqi forces begin and does the Obama White House even care?

On the front lines of Iraq’s war against Islamic State, it’s increasingly difficult to tell where the Iraqi army ends and the Iranian-supported Shiite militias begin. ... Late last year, the U.S. formally committed to train and equip three divisions of the Iraqi army. While some senior U.S. officials have had positive words for Iran’s role in the fight against Islamic State warriors, official U.S. policy is to support the integration of Iraq’s sectarian militias into the Iraqi Security Forces.

In Diyala Province northeast of Baghdad, however, it’s the other way around. On a tour of areas recently liberated from Islamic State control, General Ali Wazir Shamary told me that ultimately his orders came through a chain of command that originated with Amiri. In other words, the Iraqi army is integrating into Amiri’s Badr Organization in Diyala as opposed to integrating the militias into the army.

If it is Iranian forces, and not the Iraqi army, that ends up in control of Tikrit, that would be quite a gift to Tehran. And if the attack on Mosul scheduled for later this summer proceeds in much the same manner, and Earnest confirmed Wednesday it likely would, then it is worth asking how much of Iraq Obama will end up giving to Iran in addition to the right to build nuclear weapons.