Why Obama's Executive Amnesty Is A Golden Opportunity For Marco Rubio 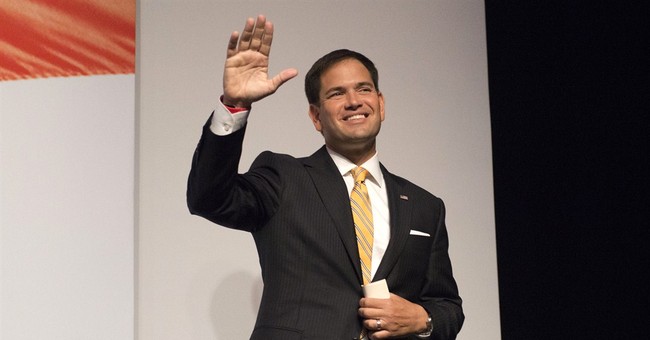 Talk to any conservative about whether or not they could support Sen. Marco Rubio (R-FL) in a Republican presidential primary and you'll invariably get the same answer: "I just don't trust him on immigration."

And it is true. Rubio squandered his hard won credibility with many conservatives when he teamed up with Sen. Chuck Schumer (D-NY) to sell the Gang of Eight immigration reform bill.

But while Rubio has since distanced himself from that effort, he still has not regained conservatives' trust.

President Obama's impending executive amnesty could change all that.

Right now the Republican Party is divided between moderates who want to pass a long-term government funding bill, thus allowing Obama to enact his amnesty, and conservatives who want Congress to use their constitutionally provided power of the purse to reign in Obama's unprecedented abuse of executive power.

Rep. Mario Diaz-Balart (R-FL), a supporter of Gang go Eight-style immigration reform, isn't always right about everything, but according to The Washington Post, he "has been counseling House Republicans this week about the need to show empathy for undocumented workers as the party rails against the Obama administration... He is concerned that too much vitriol could send the wrong message to Hispanic voters."

This is wise advice. As is The Free Beacon's Matthew Continetti's suggestion that conservatives also point out how Obama's past executive actions already created a humanitarian crisis on the border this past summer.

If Rubio were to come out in favor of a conservative plan to use the appropriations process to limit Obama's abuse of power, and were he to make the same effort selling that plan to conservative media that he made selling the Gang of Eight plan, he could undo much, if not all, of the previous damage that his Gang of Eight support originally caused.

God bless Sen. Jeff Sessions (R-AL) and Rep. Matt Salmon (R-AZ), but the conservative wing of the Republican party is in desperate need of a high-wattage officeholder that can lead the effort against Obama's amnesty. Conservatives need a leader that can speak about the plight of undocumented workers with instinctive empathy, a leader that knows the immigration issue backwards and forwards, and a leader who has the credibility among moderates that he will not lead the party off a cliff.

Rubio could be that leader.

But will he take up the cause?