Why Is Hal Rogers Caving To Obama On Executive Amnesty? 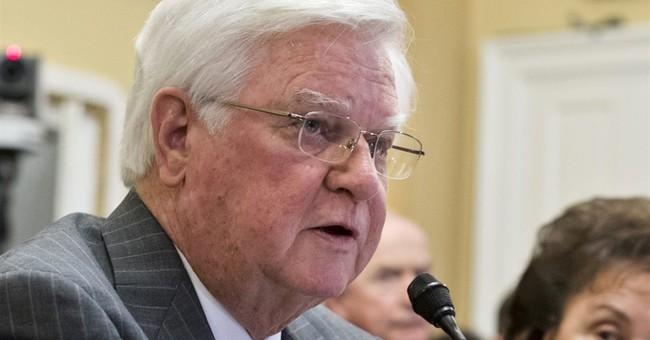 “I am not on the ballot this fall," President Obama said in his prepared remarks at Northwestern University on October 2nd. But my "policies are on the ballot," Obama continued. "Every single one of them.”

Obama's Democratic party was then crushed at the polls a month later, losing a net 8 (soon to be 9) Senate seats, at least 12 House seats, as well as three governorships.

GOP leaders made clear in the days after the election that they wanted to set their own agenda when they control of both chambers next year without any lingering fights about spending for the current fiscal year. The leaders also want to look for other ways to push back against the president’s moves on immigration, said a senior Senate GOP aide.

House Appropriations Committee Chairman Hal Rogers (R., Ky.) said it would be unrealistic to expect the president would sign a spending bill that included the immigration language.

“I don’t want a shutdown,” he said. “You should not take a hostage that you can’t shoot.”

1) Obama is the hostage taker here. Obama said his policies were on the ballot and then his policies got crushed at the ballot box by the American people. All Congress has to do is pass a spending bill that keeps everything else up and running but also forbids Obama from spending any funds on work permits and other documents for illegal immigrants. Then let Obama shutdown the federal government over his own unprecedented abuse of executive power.

2) There is no other way but the power of the purse to check Obama's lawless abuse of executive power. Impeachment would be overkill and would drown out any other GOP agenda items far worse than an appropriations battle would. And Speaker John Boehner's (R-OH) lawsuit has proved to be such a bad joke it hasn't even been filed yet.

3) The GOP will not have any agenda if they cave to Obama on amnesty. This is not the only issue where Obama wants to use executive power to get around Congress. On Iran, Obamacare, energy, education, internet regulation, etc., Obama wants to act as if Congress does not exist. If Republicans cave on amnesty because they are afraid of being blamed for a shutdown, then Obama will see it as a green light to walk all over them on everything.

Now if House Republicans want to pass a short-term funding bill now, one that funds the government through till January, so that they can then fight Obama alongside a Republican Senate, that makes some sense.

But to pass a year-long funding bill and forfeit all leverage over Obama on this issue would be a gut punching betrayal for Republican voters. It just makes no sense.