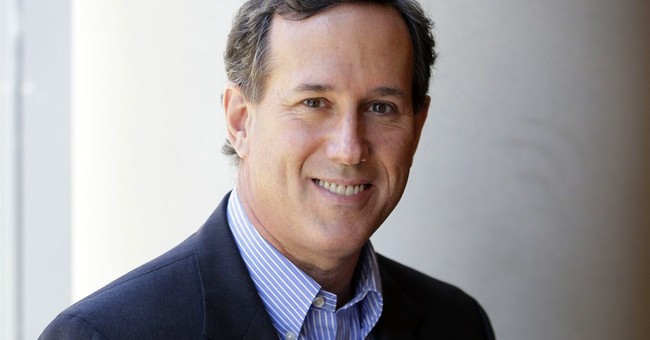 Commenting on a intra-left debate between Jonathan Chait and Ta-Nehisi Coates about race and poverty, Ross Douthat wrote earlier this week:

I do think that if you’re looking for a discussion of the “culture of poverty” that isn’t particularly racialized and that’s pretty intently focused on social problems in the white (and Hispanic) working class as well as in African-American communities, you can find it quite easily among right-of-center policy thinkers, in the pages and pixels of conservative journals and magazines, and (occasionally, if too-infrequently) in the rhetoric of conservative politicians as well.

As it just so happens, the May edition of Townhall Magazine will feature a lengthy interview with former-Sen. Rick Santorum (R-PA) about his new book, Blue Collar Conservatives: Recommitting to an America That Works. The full interview will be posted on May 1, but Santorum does touch on poverty in his book and below is a portion of our exchange in the issue:

Townhall: In Blue Collar Conservatives you write, “The poorest kids in San Francisco, Washington, D.C., and Salt Lake City, for example, are more than twice as likely to reach the highest income percentiles as those in Dayton, St. Louis, and Charlotte.” Why do you think we have this widening gap in the country between urban and rural areas? Do you think that is reversible?

Santorum: If you look at where poverty is the highest, where the unemployment rate is the highest, it’s predominantly in rural areas. It’s not necessarily where most people would think it is. When most people think of poverty, they think of inner-city areas like Detroit or Philadelphia. But where the poverty is most acute is in rural areas and there you are really going to have to look at the policies of the government and what they have done to create that disparity.

Certainly a big part of it is the environmental movement and the turn against a resource-based economy. And so you look at whether it is timber or whether it is mining or whether it is agriculture, there is a whole host of other things like manufacturing. Manufacturing is predominantly done outside of the urban core of most cities.

And all of these sectors of the economy have been very much under assault from the environmentalists. And therefore there is a lack of opportunity. And because of the nature of the community, small town America doesn’t have a lot of options.

Where as in urban America there is a huge city around you. There are all sorts of places you can go for job opportunities that you don’t necessarily have in small-town or rural America.

The phrase "culture of poverty" does not appear any where in Santorum's book. But despite his desire not to be "pigeonholed" as the "social conservative" candidate, much of it does focus on the decline of American culture generally, and marriage specifically.

Santorum, however, does not blame gay marriage for any of this. In fact, he explicitly says, "Let me be clear—I am not blaming the breakdown of marriage and the family on the same-sex marriage movement."

Instead, Santorum largely blames the federal government, specifically the tax code and welfare state, for creating a series of incentives that discourage marriage.

I don't agree with all, or even many, of Santorum's policies, but his ability to address poverty in non-racial terms should be commended.