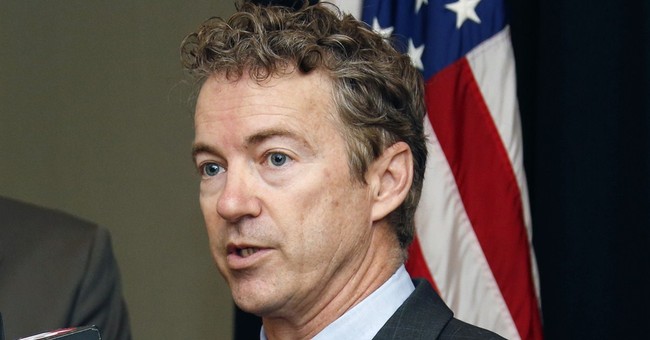 Festivus, the made-up holiday popularized by the television show Seinfeld includes an "airing of grievances" as part of the "celebration." Like last year, Sen. Rand Paul (R) took to Twitter to air some of his grievances with Washington, politics in general, and other politicians. He also dropped a pretty strong hint that he's considering a 2016 run.

While airing his "grievance" that fellow Kentuckian Sen. Mitch McConnell (R) won't let him borrow his "awesome" sweater vest, Paul then tweeted about the importance of fashion in a campaign (noting Santorum's trademark vests), and then...this:

Of course, everyone has to be themselves, and I have my own style. I think this will be a popular item this year pic.twitter.com/ejuPwOAb6E

While this certainly wasn't an official announcement, it certainly raised a few eyebrows among Paul's Twitter followers.

@SenRandPaul Is that the formal announcement? haha

@SenRandPaul Is this an announcement?

@SenRandPaul ...sooo is this an announcement?

After making it clear that he will not be airing any (more) grievances against Sen. Marco Rubio (R-FL) (saving that for the feats of strength, perhaps?), Paul left Twitter, promising to be back with additional grievances about the Federal Reserve and other topics.