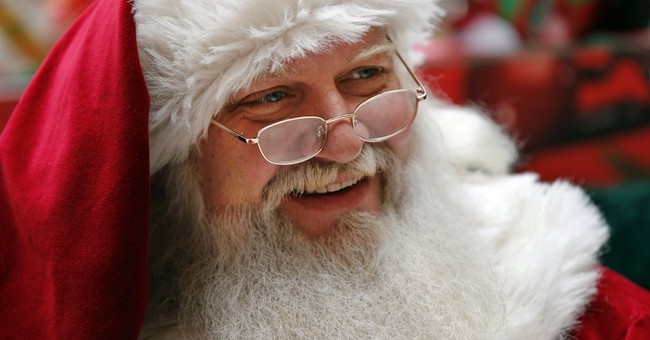 In a move that seems decidedly Orwellian, the University of Maine has removed images of Santa Claus, candy canes, Christmas trees, wreaths, and menorahs from public locations on campus in the name of "diversity." Instead of the highly offensive displays of evergreen arrangements and trees on the flagship university of the Pine Tree State, the University of Maine has chosen to decorate this year with snowmen, snowflakes, and decidedly non-denominational lights.

According to WABI, some members of the University of Maine's staff received the following email reminding them to avoid anything that could remotely be perceived as religious:

Just wanted to remind everyone that Aux Services is not to decorate any public areas with Christmas or any other religious themed decorations. Winter holiday decorations are fine but we need to not display any decoration [sic] that could be perceived as religious.

What is allowed our [sic] winter themes, plain trees without presents underneath, decorative lights, but not on trees, snow flakes, etc.

If you are unsure, best not to use or ask me for clarifications.

At least one of the trees taken down by the university was being used as an advertisement for a fraternity's food and clothing drive for a local charity.

UMaine released a statement explaining the new decorative policy, saying that by banning everything even remotely religious from being displayed in public, they want to reflect the diversity of their community.

“…the university makes every effort to ensure that all members – students, employees, alumni and the public – feel included and welcome on campus. Decorations on the UMaine campus are therefore reflective of the diversity found in our community.”

Never mind the fact that this statement makes very close to zero sense...actually, scratch that, it makes zero sense. It's not "reflecting diversity" by erasing all displays of religious and cultural diversity on campus and replacing them with weather patterns and anthropomorphic snow creatures. It's "reflecting" a bizarre and terrible world where everyone is the exact same. While many cultures and religions have celebrations at this time of year, how are students supposed to learn about different things if they aren't allowed to be displayed?

Santa Claus, wrapped presents, and Christmas trees, sure, I guess, are figures of Christmas. Granted, they're not religious figures (I don't think the Magi came to Jesus bearing gold, frankincense, and myrrh wrapped in a box with paper and a ribbon bow, but I could be wrong), but they're still symbols of Christmas in the United States. Menorahs, obviously, are a religious symbol, but from my experience as a Catholic who grew up in Maine, I've never exactly felt threatened or excluded when one was on display in a classroom or in a public space. Displaying a menorah is an opportunity to teach people about the story of Hanukkah and the reason as to why there are eight candles lit at different times throughout the celebration. Candy canes, while traditionally sold at Christmastime (a mistake, in my opinion, as candy canes are amazing and should be consumed all year round), are not explicitly tied to any religious celebration. People of all creeds and colors are welcome to enjoy hook-shaped peppermint candy. Wreaths are also not religious in nature and are simply decorations featuring the only plant in the state that still has something resembling color at this time of year.

UMaine is doing a huge disservice to their students with this bizarre ban of anything remotely religious and seasonal that isn't composed of crystallized water. While I'm glad the ban doesn't single out Christmas or symbols of Christianity, it's still very strange and a departure from past university policy with seemingly no real explanation other than "we're worried someone might be offended by a wrapped box or a tree with decorative lights." College is a time to learn about other people, not remove oneself from anything that might possibly be different than how you were raised. This is an incredibly misguided attempt at "diversity," and is in fact the complete opposite. This is political correctness at its worst.