Two Out of Three American Youth Unfit for Military 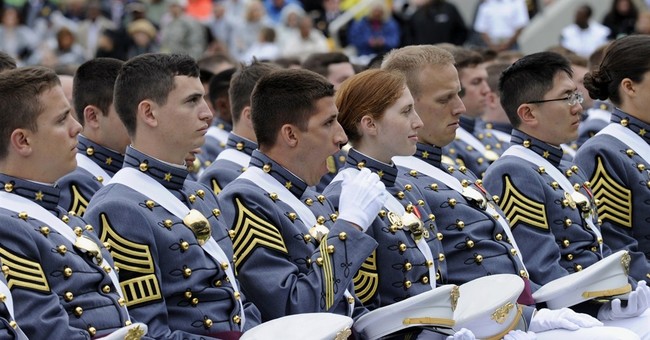 The U.S. military estimates that roughly two thirds of today's youth are ineligible to serve due to a variety of physical, behavioral, and educational issues. Military hopefuls can be deemed unfit for service due to tattoos, felony convictions, low scores on intelligence tests, and drug use, among other reasons. 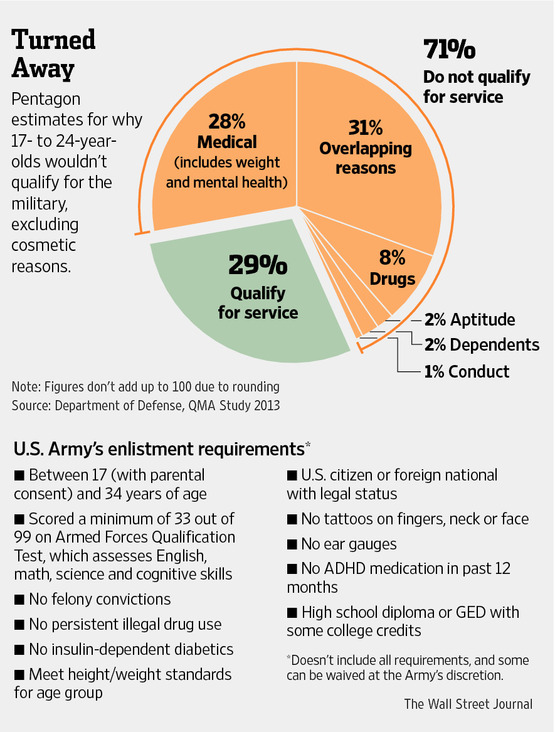 The most common reason recruits are disqualified is obesity. Child and adolescent obesity rates have skyrocketed in the past 30 years, and in some states nearly one out of five high schoolers is considered to be obese.

The military's new tattoo standards have also put a hamper on some recruits. The military has banned tattoos on the hand, forearm, calf, and above the neck. In most states, it is illegal to tattoo someone under the age of 18 unless a parent has given consent or is present.

This is sad--both for the rejected recruits and as a snapshot of the country as a whole. A graduate of high school should, in theory, be adequately prepared to serve in the military. It's crazy to think that roughly one out of four students is unable to score high enough on a test with a pretty generous curve. That's indicative of major failure in America's schools. Furthermore, this is another sign of how over-medicated American students, particularly boys, are. Over 10,000 toddlers have been prescribed Ritalin for supposedly having ADHD. That's about 10,000 people who might potentially have disqualified themselves from the military for the crime of being a hyperactive three year old. I'm not even going to touch the obesity epidemic--it's the result of a combination of junk science about food, not exercising, and general ignorance regarding proper nutrition. As Michelle Obama has learned, there's no real quick fix to this issue.

Hopefully these statistics serve as a wake-up call to parents, teachers, and kids: shape up, smarten up, and be 100 percent sure you really want that neck tattoo. America needs a strong military, and these numbers are truly frightening.